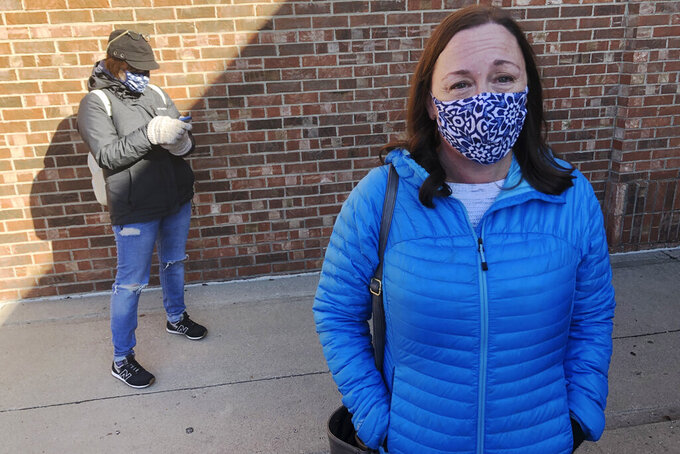 On Friday, Oct. 30, 2020, Stacy Carlson of Hilliard in suburban Columbus, Ohio, said in no uncertain terms that the only issue important to her is voting out President Donald Trump. "The division of the country, his handling of COVID, his handling of civil liberties. The list goes on," said Carlson while waiting in a line of hundreds of early voters. (AP Photo/Andrew Welsh-Huggins)

Voters in Ohio gave President Donald Trump the state’s coveted 18 electoral votes while holding negative views about the country’s direction and the economy, according to an expansive AP survey of the American electorate.

As voters on Tuesday finished deciding between Trump and Democratic rival Joe Biden in a year roiled by a global pandemic and an economic downturn, AP VoteCast found that almost 3 in 5 Ohio voters said the U.S. it is on the wrong track while about 2 in 5 said the nation is headed in the right direction.

The AP has called Ohio for Trump.

Here’s a snapshot of who voted and what matters to them, based on preliminary results from AP VoteCast, a nationwide survey of about 127,000 voters and nonvoters — including 3,902 voters and 722 in Ohio — conducted for The Associated Press by NORC at the University of Chicago.

For a second time, Trump won Ohio behind the strong backing of working-class voters and those in the state’s rural areas.

Voters without a college degree were more likely to support Trump over Biden while college-educated voters appeared to prefer the Democrat.

Those in small towns and rural areas were more likely to support Trump over the former vice president. Biden was neck and neck with Trump among suburban voters, and he led Trump among voters in cities.

Biden’s strategy in the state centered on winning its suburbs and taking back the votes of blue-collar workers who abandoned the Democratic party in 2016.

Stacy Carlson, 50, of Hilliard in suburban Columbus, said there wasn’t just one issue that helped make her decision to vote for Biden.

Trump touted his success with the economy and promised that his policies would bring back jobs to hard-hit communities.

Chris Bennett, 46, an auto mechanic from Cleveland said he voted for Trump and liked his handling of the economy. “Before the pandemic hit, it was awesome and it’s rebounding as fast as I think it can,” he said.

Ohio began setting records for rising coronavirus cases in October and seeing a rise in deaths. The surge coincided with the beginning of early voting across the state — difficult timing for Trump, who was criticized by Biden for not doing enough to control the pandemic.

Overall, 1 in 5 voters said the virus in the U.S. is completely or mostly under control, and roughly 3 in 10 said it’s somewhat under control. About half of Ohio voters think the coronavirus is not at all under control in this country.

Trump has argued that governors should fully reopen the economy and falsely asserted on the campaign trail that Biden was determined to lock it down to control the rising virus numbers. Biden has said he would only tighten virus restrictions if that is what government scientists advise.

Karen Beamon, a 58-year-old who lives in a rural area near Toledo, said she voted for Trump and liked that he pushed back against wearing masks.

“I’m really disappointed we’re under such mandates,” she said. “I think people who have pre-existing conditions should be careful. I’m really concerned that if Biden wins he'll put us under another lockdown."

Trump argued that Ohio’s economy was strong before the pandemic hit. He also bragged that manufacturing in the state was booming again — even though those jobs began slipping in 2019 after two years of small growth.

Voters were slightly more negative than positive in their assessments of the nation’s economy. Overall, just under half described economic conditions in the U.S. as excellent or good, while roughly a little more than half called them not so good or poor.

“Our economy has taken a downturn. Millions of people are unemployed right now. To me, that’s not a great America,” said the Rev. Jerry Boose, a 63-year-old Baptist pastor who lives near Toledo and voted for Biden.

Stacy Leck, a 51-year-old customer service representative who lives just outside Toledo, said Trump is more likely to pull the nation out of the economic downturn.

“He knows how to run things,” she said. “I’m not going to say he’s not crazy. Some of the things he does is childish. But I feel he is best suited because of his background in business.”

The coronavirus pandemic was top of mind for many voters in Ohio, with 2 in 5 saying it is the most important issue facing the country today.

Voters also considered the economy a major issue, with 3 in 10 saying it ranked at the top. Roughly 1 in 10 named health care.

AP VoteCast is a survey of the American electorate conducted by NORC at the University of Chicago for Fox News, NPR, PBS NewsHour, Univision News, USA Today Network, The Wall Street Journal and The Associated Press. The survey of 3,902 voters in Ohio was conducted for eight days, concluding as polls closed. Interviews were conducted in English and Spanish. The survey combines a random sample of registered voters drawn from the state voter file and self-identified registered voters selected from nonprobability online panels. The margin of sampling error for voters is estimated to be plus or minus 1.9 percentage points. Find more details about AP VoteCast’s methodology at https://ap.org/votecast.