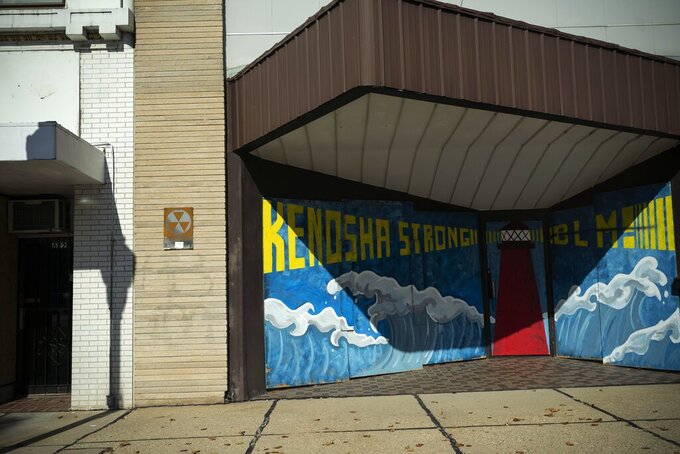 The windows of a shop front are boarded up with plywood which has a mural that reads "Kenosha Strong and BLM!" painted on it, Friday, Oct. 30, 2020, in downtown Kenosha, Wis. Two months after street violence shook the little lakeside city of Kenosha dozens of businesses are still boarded. Many of these businesses are open, but with divisive elections just days away some are also hedging their bets, covering up windows and sometimes building outer sets of plywood doors that can be easily shut, like castles pulling up their drawbridges, if trouble returns. (AP Photo/Wong Maye-E)

Voters in Wisconsin gave Democratic presidential candidate Joe Biden its 10 electoral votes while holding negative views about the country’s direction and economy, according to an expansive AP survey of the American electorate.

The race between President Donald Trump and Biden concluded Tuesday as the nation struggles with a once-in-a-century pandemic and a deep economic downturn. AP VoteCast found that nearly 4 in 10 Wisconsin voters said the U.S. is on the right track and 6 in 10 voters said it is headed in the wrong direction.

AP called Biden the winner of Wisconsin. The Trump campaign said it plans to demand a recount.

Here’s a snapshot of who voted and what matters to them, based on preliminary results from AP VoteCast, a nationwide survey of about 133,000 voters and nonvoters -- including 3,506 voters and 593 nonvoters in Wisconsin -- conducted for The Associated Press by NORC at the University of Chicago.

Trump had hoped to repeat his 2016 victory when he captured the state's 10 electoral votes by less than 23,000 votes, or about 1%. His victory in what was once part of a solidly Democratic voting “Blue Wall” of Midwest and Great Lakes states was a first for a Republican presidential candidate in over two decades.

Biden had an advantage over Trump among voters under 45 but older voters while older voters modestly preferred Trump.

“America first, there you go," said David Danke, a 64-year-old retiree who voted for Trump in Kenosha. "Keep the jobs in this country.”

Wisconsin has the nation's third highest number of coronavirus cases per capita and its death toll recently topped 2,000.

Eric Engstrom, a 31-year-old investment analyst in Madison, Wisconsin, who voted by mail for Biden, said the virus is the most immediate threat facing the nation.

“My wife and I were just on a walk talking about how we’re expecting a baby in January and to see hospitals filling up, to even think about the potential of one of us or both of us being sick when the baby is born. …The response to this has been abysmal,” he said. “If there was any chance that I was going to vote for Trump, it was eliminated because of the pandemic.”

Fears of catching the virus help explain why so many Wisconsin voters chose to return absentee ballots this year. Even before Election Day, more than 1.8 million had already voted this way, more than half of the total votes cast in the 2016 election.

The coronavirus pandemic was top of mind for many voters in Wisconsin. More than 4 in 10 said it is the most important issue facing the country today.

Voters also considered the economy a major issue, with about 3 in 10 saying it ranked at the top.

Trump visited Wisconsin several times in his campaign, warning supporters at an October rally that Democrats were trying to “destroy the American way of life." He emphasized his law-and-order message in an earlier Kenosha visit, after the protests over the police shooting of Jacob Blake there.

During his own Kensoha visit, Biden met with the Blake family and expressed support for the Black Lives Matter movement.

Voters were more negative than positive in their assessments of the nation’s economy. Overall, more than 4 in 10 described economic conditions in the U.S. as excellent or good, and more than 5 in 10 called them not so good or poor.

Wisconsin’s unemployment rate was 5.4% in September, below the national rate but 2 points higher than a year ago.

Amy Arntsen, 56, of Middleton, said she voted for Biden partly because she is worried about people losing their jobs during the pandemic, and is not reassured at all by a rising stock market that the president has touted.

“The rich are getting richer but . . . the poor are getting poorer,” she said. “The way we value the stock market above people is corrupt.”

AP VoteCast is a survey of the American electorate conducted by NORC at the University of Chicago for Fox News, NPR, PBS NewsHour, Univision News, USA Today Network, The Wall Street Journal and The Associated Press. The survey of 3,506 voters in Wisconsin was conducted for eight days, concluding as polls closed. Interviews were conducted in English and Spanish. The survey combines a random sample of registered voters drawn from the state voter file and self-identified registered voters selected from nonprobability online panels. The margin of sampling error for voters is estimated to be plus or minus 2 percentage points. Find more details about AP VoteCast’s methodology at https://ap.org/votecast.