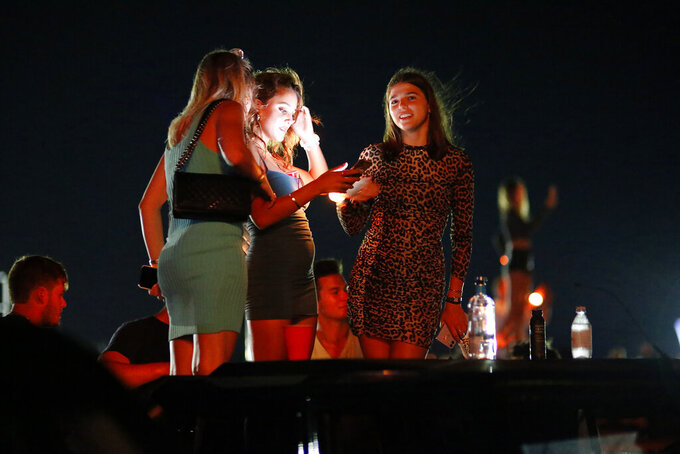 In this July 25, 2020, photo provided by Rich Schineller, three young women emerge through the roof of an open vehicle and stand close to one another without wearing any face coverings at the "Safe & Sound" concert in Southampton, N.Y. New York Gov. Andrew Cuomo says he is "appalled" by videos showing crowds standing close together at a Hamptons concert featuring electronic music duo The Chainsmokers over the weekend. (Rich Schineller via AP)

ALBANY, N.Y. (AP) — New York's governor says he is “appalled” by videos showing crowds standing close together at a Hamptons concert featuring electronic music duo The Chainsmokers over the weekend.

Gov. Andrew Cuomo said the state Department of Health will conduct an investigation into “egregious social distancing violations.” Cuomo warned in a Tuesday call with reporters that violations of public health law can result in civil fines and a potential for criminal liability.

“We have no tolerance for the illegal reckless endangerment of public health,” reads the governor’s Monday night tweet.

Cuomo shared a social media video, which has over 6 million views, that showed crowds of people standing and swaying near the stage. The video shows attendees who appeared to be wearing masks, but many individuals were standing closer than 6 feet (2 meters).

Cuomo questioned why local law enforcement didn’t break up that was “out of control and all the rules were being violated.” He said the state’s investigation will look at the role of local leaders and reports of “ongoing” violations in the village of Southampton.

The governor’s criticism comes as he argues local governments largely in downstate New York have failed to enforce social distancing and mask rules. State Health Commissioner Howard Zucker chided Schneiderman in a Monday letter and questioned how Southampton could have issued a permit for an event that posed a public health threat.

In response, Schneiderman said the town is also investigating the concert, vowed to hold organizers accountable and defended the town’s decision to permit the concert.

“The town is greatly disturbed by reports of what occurred at the event and are investigating this matter and will hold the organizers accountable,” he said in a Tuesday letter to Zucker.

Schneiderman said the concert’s special event permit didn’t approve any place for attendees to gather, and instead required organizers to follow federal, state and local social distancing and health protocols.

“For most of the evening, the event appeared to be running smoothly,” Schneiderman wrote. “It wasn't until later in the evening that town officials observed possible permit violations occurring in an area immediately in front of the stage. There was no reference to such an area in the permit application and the town did not approve any such gathering space."

Schneiderman acknowledged that he and the police chief were present “earlier in the evening” at the concert. He said a police detail, the chief fire marshal, “several support staff”were present at the event.

“Once violations became apparent, corrective measures, including requesting organizers to address the situation and the police department engaging in efforts to orderly disperse the crowd took place,” he said.

The concert’s organizers, In the Know Experiences and Invisible Noise, defended their efforts to follow social distancing protocols in a statement.

Event staff took the temperatures of attendees as they arrived in cars, parked in designated spots and were instructed to wear complimentary face masks at all times except in restrooms. The organizers said staffers reminded attendees of the rules every 30 minutes from the main stage, while security guards patrolled to enforce protocols.

Neither Schneiderman nor the concert's organizers, In the Know Experiences, respond to questions Tuesday about why police and event organizers didn't appear to swiftly disband crowds apparent in social media videos.