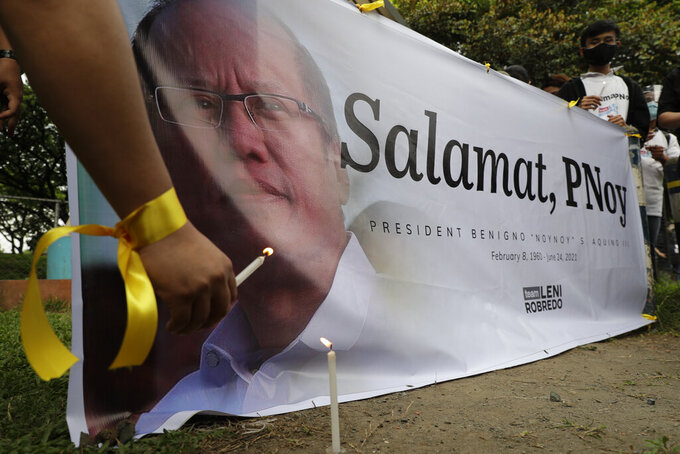 MANILA, Philippines (AP) — Former Philippine President Benigno Aquino III was buried in austere state rites during the pandemic Saturday with many remembering him for standing up to China over territorial disputes, striking a peace deal with Muslim guerrillas and defending democracy in a Southeast Asian nation where his parents helped topple a dictator.

Aquino died Thursday at age 61 of kidney disease arising from diabetes following a long public absence, after his single, six-year term ended in 2016. Family and friends sang a patriotic song after a silver urn with Aquino's remains was placed beside the tomb of his mother, former President Corazon Aquino. Military honors included a 21-gun salute in a private cemetery in Manila.

Aquino’s family did not want him or parents buried at the national Heroes’ Cemetery, where past presidents and top officials had been laid to rest, including dictator Ferdinand Marcos. Aquino’s mother and his assassinated father, an anti-Marcos opposition senator, helped lead a resistance that sparked a 1986 army-backed “people power” revolt, which ousted Marcos.

“In his journey beyond, his two heroic parents will be there to embrace him,” Archbishop Socrates Villegas said during Mass.

Villegas praised Aquino for living up to an image of a humble and incorruptible politician who detested the trappings of power. Fighting back tears, Villegas said he envied Aquino because he was now in a place “where God’s commandments are no longer transgressed and God’s name is no longer blasphemed, where vulgarity and brutality and terror are vanquished by compassion.”

The remarks, which was beamed live by TV networks, were an oblique criticism of the current populist president, Rodrigo Duterte, whose brash style, expletives-laced rhetoric and tirades against the dominant church in the Philippines stood in sharp contrast to Aquino. Church leaders have criticized Aquino's successor for a brutal crackdown on illegal drugs that has left thousands of petty suspects dead and alarmed Western governments and human rights watchdogs.

Although Duterte has publicly ridiculed the opposition Aquino was associated with, he called for the outpouring of sympathy for Aquino to be turned into an “opportunity to unite in prayer and set aside our differences.”

After Mass, Aquino’s urn was carried in a convoy to the cemetery with thousands of people lining roadsides and taking pictures. Some wore yellow clothing or ribbons, the color associated with the Aquino-led political opposition.

President Joe Biden called Aquino a “valued friend and partner to the United States” who served his country “with integrity and selfless dedication.”

“President Aquino’s steadfast commitment to advancing peace, upholding the rule of law, and driving economic growth for all Filipinos, while taking bold steps to promote the rules-based international order, leaves a remarkable legacy at home and abroad that will endure for years to come,” Biden said in a statement.

Aquino, whose family spent years in U.S. exile during Marcos’s rule, had turbulent ties with China as president.

After Beijing sent ships to occupy a shoal off the Philippine coast, Aquino authorized the filing in 2013 of a complaint that questioned the validity of China’s sweeping claims in the South China Sea before an international arbitration tribunal. The Philippines largely won. But China refused to join in the arbitration and dismissed the tribunal’s 2016 ruling.

Aquino’s challenge to the rising superpower was praised by Western and Asian governments but plunged relations with Beijing to an all-time low.

At home, one of Aquino’s major successes was the signing of a 2014 peace deal with the largest Muslim separatist rebel group, the Moro Islamic Liberation Front, that eased decades of fighting in the country’s south.

Teresita Deles, who served as Aquino’s peace adviser, said the pact prevented the rebels, who are now helping administer a Muslim autonomous region, from pressing on with an insurgency at a time when the Islamic State group was trying to gain a foothold in Southeast Asia.

“It changed the whole landscape of their lives. The children’s schooling has not been interrupted for seven years and the fields are planted again,” Deles told The Associated Press.

But while Aquino moved against corruption — detaining his predecessor, Gloria Macapagal Arroyo, and three powerful senators — and initiated anti-poverty programs, the deep-seated inequalities and weak institutions in the Philippines remained too daunting. Arroyo was eventually cleared of corruption charges because of insufficient evidence.

Opponents pounded on missteps, though Aquino left office with high approval ratings. Philippine presidents are limited to a single term.

Aquino campaigned against Duterte, warning that a looming dictator would set back the democratic and economic momentum achieved in his own term. Duterte won with a large margin, promising to eradicate illegal drugs and government corruption in his first three to six months in office — audacious pledges that remain to be fulfilled.

In 2016, Duterte allowed the burial of Marcos in a secrecy-shrouded ceremony with military honors in the Heroes’ Cemetery despite protests from pro-democracy activists. The late dictator's son and namesake ran for vice president in 2016 but lost by a slim margin, and is reportedly considering the same or even the top post when Duterte's term ends next year.