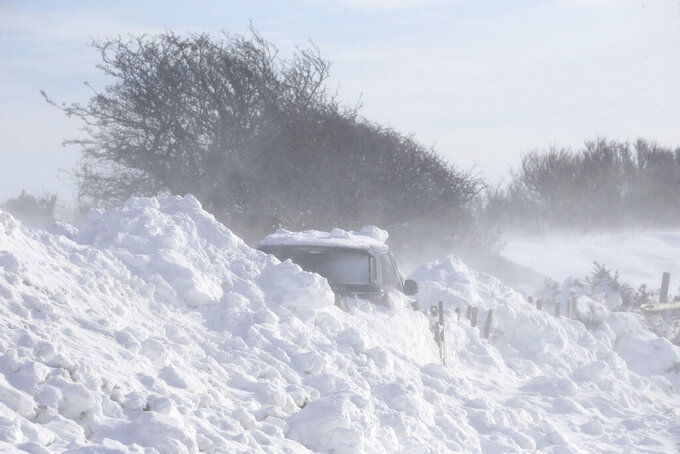 A car is buried under drifting snow on a hillside near the sea in southern Folkestone, England, Friday Feb. 12, 2021. The cold snap continues to grip much of the nation Friday. (Gareth Fuller/PA Wire( /PA via AP)

BERLIN (AP) — Aid workers are warning that the sharp drop in temperatures across parts of northern Europe this month has put homeless people at serious risk.

German homeless aid group BAGW said Friday that four people have been found frozen to death since a blast of Arctic air brought freezing temperatures and heavy snowfall to much of the country last week.

Authorities in the southern city of Nuremberg said a homeless woman was found with a newborn baby in minus 15 Celsius (5 degrees Fahrenheit) temperatures early Friday. A police patrol spotted the 20-year-old woman, a companion and the infant on a ventilation grate outside a subway station. Mother and child were taken to a hospital to warm up and for observation, the dpa news agency reported.

Icy temperatures have also led to numerous accidents on roads and waterways. Police in southwestern Germany said a 49-year-old man was crushed to death Thursday when the tractor he was driving slid and toppled over on an icy field.

In western France, freezing rains turned roads into chutes of treacherous ice. Authorities in Brittany said smaller roads that link towns and villages in the largely rural region were unusable, and urged people to stay home. Large trucks were banned from circulation.

The German Red Cross warned people to be careful when skating or walking on frozen lakes and rivers after several adults and children fell through the ice and had to be rescued in recent days.

Authorities in northern Germany have for the first time in years deployed icebreakers to smash passages through frozen shipping canals.

In the neighboring Netherlands, skating fans flocked to the ice Friday, causing a headache for authorities trying to enforce social distancing measures to stop the spread of the coronavirus.

Authorities blocked roads close to some popular skating spots and ordered skaters off dangerously thin ice in some locations. Emergency services had to rescue at least one skater who sank through ice covering a lake next to the Dutch parliament buildings in The Hague.

In the northern German town of Verden, police ordered some 50 skaters and hockey players off the ice, saying it was too thin and they weren’t wearing face masks.

The cold weather that has gripped northern Europe is forecast to make its way toward the southeast in the coming days. The Greek weather service predicted Athens might see snowfall.