Are you eating, teaching? Poll hopes to measure virus impact 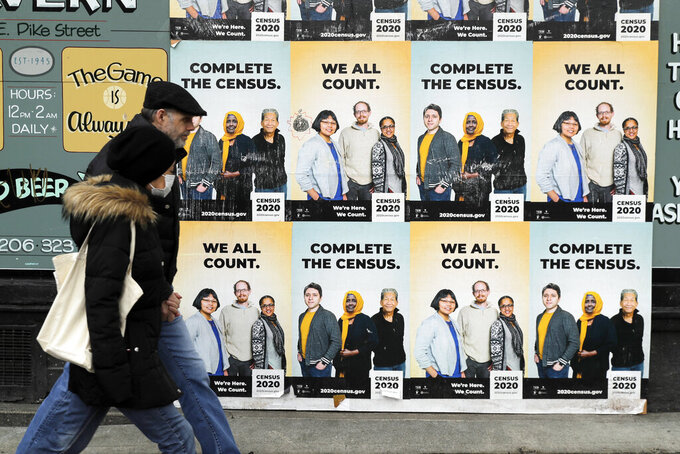 FILE - In this April 1, 2020, file photo, people walk past posters encouraging participation in the 2020 Census in Seattle's Capitol Hill neighborhood. Just how badly has the new coronavirus impacted life in the U.S.? The U.S. Census Bureau, along with five other federal agencies, will try to answer that question with a new experimental, weekly survey that just got approved earlier this week. (AP Photo/Ted S. Warren, File)

ORLANDO, Fla. (AP) — Just how badly has the new coronavirus affected life in the U.S.?

The U.S. Census Bureau, along with five other federal agencies, will try to answer that question with a new experimental, weekly survey that officials approved earlier this week.

The Census Bureau is hoping the three-month-long survey provides concrete data on what has been going on at the national and state levels since the coronavirus's spread prompted widespread stay-at-home orders and business disruptions across the U.S, beginning last month.

The weekly online questionnaire sent to households by email or text will ask respondents whether they've lost jobs or income, if they are being paid during a furlough, if they have enough food to eat, how much they spent in the past week, whether they're depressed, how many hours they're spending on teaching activities at home and if they delayed getting medical help because of the pandemic.

“There are no other known data sources that can provide comprehensive, relevant, and timely information," the Census Bureau said in its request. “At the very least, this survey will provide non-anecdotal evidence about the effects of the pandemic on the population even if the quality is lower than would be traditionally acceptable."

The approval of the Household Pulse Survey was first reported by NPR. A sample questionnaire makes clear to respondents that they aren't answering the 2020 census, which started earlier this year but has faced delays because of the coronavirus.