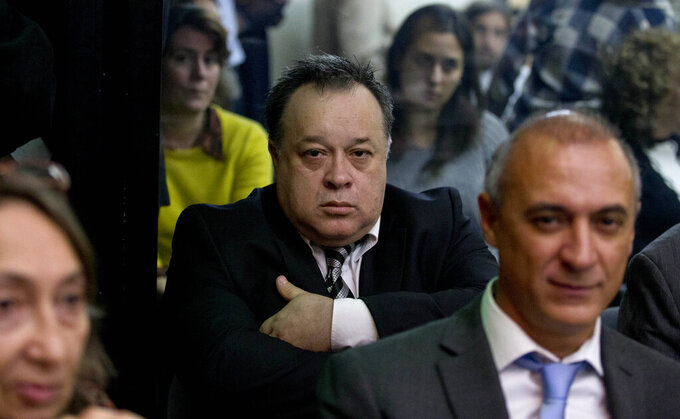 FILE - In this Aug. 6, 2015 file photo, Carlos Telleldin attends a trial where he and others are accused of derailing an investigation into the 1994 bombing of the Argentina Jewish Center in Buenos Aires, Argentina. A court on Wednesday, Dec. 23, 2020, has cleared Telleldin, the only Argentine still facing charges in the bombing. (AP Photo/Natacha Pisarenko, File) 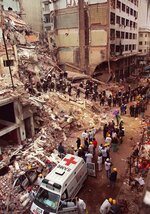 BUENOS AIRES, Argentina (AP) — A court said Wednesday it has cleared the only Argentine still facing charges in the 1994 bombing that killed 85 people at a Jewish cultural center in the nation's capital.

The federal court ruling came after former auto dealer Carlos Telleldín again denied knowing that the truck he sold would be used as a bomb in the attack on the Argentine Israelite Mutual Association, which caused the organization’s main building to collapse. He proclaimed his “total and absolute innocence.”

Prosecutors had asked for a 20 year prison sentence.

The ruling, which can be appealed was delivered in a videoconference due to the COVID-19 pandemic. The court said the basis for the ruling would be released in coming days.

No one has been convicted in the attack, which many Argentines believe has come to symbolize an inept and corrupt justice system that operates at the whims of politicians.

Prosecutors say Iranian agents were behind the attack, the bloodiest terror incident on Argentine soil, and several officials remain on Interpol's Red List. But none have been extradited to face trial and Iran denies any involvement.

Telleldín was accused initially along with several local police officers of being the Iranians' “local connection” in organizing the attack.

“We're 27 years from the terrible attack and we continue to hear, ‘Telleldin knew, Telleldin assumed, Telleldin believed ...'” he told the court. “I don't know how to say that the truck was sold to a person who came in response to a normal advertisement and paid.”

Telleldín spent more than 10 years in jail starting in 2004 as various cases wound through the courts before he was cleared of earlier charges.

Also freed were several former police officers Telleldin had been accused of implicating in return for a $400,000 payment from the government that was cited as a key reason for throwing out the case.

Former federal judge Juan Jose Galeano, who headed the initial bombing investigation, was found guilty of embezzlement and malfeasance and sentenced to six years in prison for his handling of the case.

The Supreme Court, however, ordered Telleldín to face another trial.

Former President Carlos Menem had been charged with meddling in the case to protect some suspects, but he was cleared of charges in February 2019.