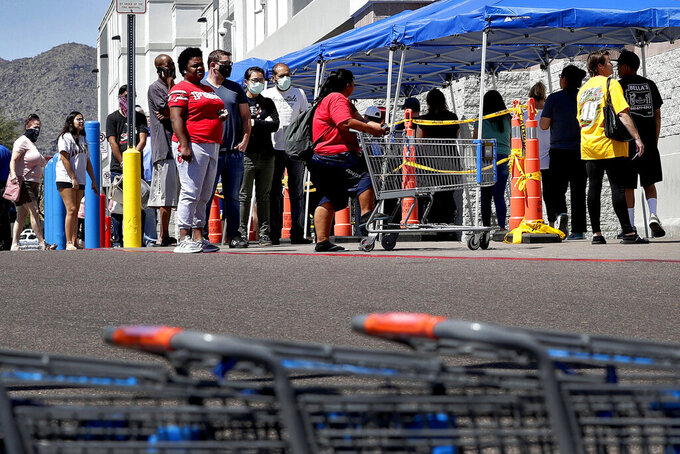 Some people wearing face masks wait in line to shop Saturday, April 4, 2020, in Tempe, Ariz. Honeywell announced that it is adding manufacturing capabilities in Phoenix to produce N95 face masks in support of the government's response to the novel coronavirus The company's Phoenix expansion will allow Honeywell to produce more than 20 million N95 disposable masks monthly to combat COVID-19 in the U.S. The new coronavirus causes mild or moderate symptoms for most people, but for some, especially older adults and people with existing health problems, it can cause more severe illness or death. (AP Photo/Matt York)

PHOENIX (AP) — Arizona has a total of over 2,000 cases of the new coronavirus, and the state's death toll from the disease has topped 50, state health officials reported Saturday as President Donald Trump approved Gov. Doug Ducey's request for a major disaster declaration .

The Department of Health Services reported 2,019 cases statewide with 52 deaths as of Saturday morning, up from 1,769 cases and 41 deaths as of Friday.

Trump's approval of the disaster declaration opens the door for the state to receive additional federal assistance, Ducey said in a statement that expressed thanks to the president.

“This continued collaboration will be crucial as we utilize all tools to combat this virus," Ducey said.

Ducey also announced that Arizona has an agreement with Honeywell to produce over 6 million N95 face masks for the state over the next 12 months and that the Department of Health Services would deliver them to counties for distribution to health, safety and emergency response workers.

All 15 of Arizona counties have diagnosed coronavirus cases. Over half of the state's cases and deaths were in Maricopa County, which includes most of metro Phoenix.

Other Arizona counties with the most cases as of Saturday morning included Pima (326), Navajo (177,) Coconino (147) , Pinal (89) and Yavapai (43), as reported by the state Department of Health Services.

Ducey asked Trump on Wednesday to declare a major emergency for Arizona.

Ducey declared an emergency for the state on March 11, a step required for the federal declaration.

Charlotte, North Carolina-based Honeywell announced March 30 that it was adding manufacturing capabilities at its Phoenix campus to produce N95 masks in support of the federal government’s response to the outbreak.

“I’m grateful to Honeywell for stepping up and partnering with Arizona to help get these masks to our doctors, nurses and EMTs on the front lines,” Ducey said in a statement.

Honeywell said it anticipates the mass production of masks will create 500 jobs and that the company has begun recruiting, hiring and training manufacturing workers at its Phoenix site.

Honeywell's announcement said some masks produced in Phoenix would go to the federal government for the national stockpile but that the company also would have capacity to produce masks for states and other American healthcare and emergency response organizations.

In other Arizona coronavirus developments:

— The state Department of Corrections will now allow its officers to wear non-medical masks at work in prisons, the Arizona Republic reported, citing guidance issued by Corrections Director David Shinn. A corrections lieutenant earlier filed a whistleblower complaint saying officers were barred from wearing protective equipment because Shinn believed it would scare inmates.

— Northern Arizona University President Rita Cheng announced that the university was offering 25% credit on housing and dining charges to students who choose to move out of university housing by April 16 because of the outbreak, the Arizona Daily Sun reported.