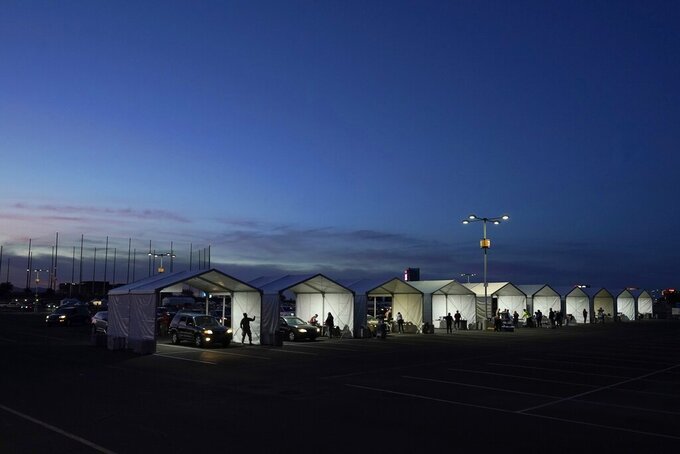 FILE - In this Jan. 12, 2021, file photo, several tents are set up so people who have registered can get their COVID-19 vaccinations as they drive-thru the parking lot of the State Farm Stadium in Glendale, Ariz. Health officials say the number of COVID-19 cases and hospitalizations in Arizona are declining despite the state having the worst infection rate in the country. Department of Health Services Director Dr. Cara Christ said Friday, Jan. 22, 2021, that the number of patients and even the positivity test rate have dipped slightly in the last few weeks. (AP Photo/Ross D. Franklin, File)

PHOENIX (AP) — The number of COVID-19 cases and hospitalizations in Arizona are declining despite the state having the worst infection rate in the country, health officials said Friday.

The number of patients and even the positivity test rate have dipped slightly in the last few weeks, according to Dr. Cara Christ, director of the Arizona Department of Health Services.

“We are starting to see a little bit of a plateau," Christ said.

It was the one bright spot of news as Arizona reached a grim milestone with a pandemic death toll of more than 12,000. That puts COVID-19 on track to eclipse heart disease and cancer as the leading cause of death in the state.

The Department of Health Services on Friday reported 8,099 additional known cases and 229 additional deaths, increasing the state's pandemic totals to 708,041 cases and 12,001 deaths. One person in every 141 Arizona residents was diagnosed with COVID-19 over the past week.

There were 4,495 COVID-19 patients occupying Arizona inpatient hospital beds as of Thursday, down from the pandemic record of 5,082 on Jan. 11, according to the state’s coronavirus dashboard.

The decrease in hospitalizations was enough for Arizona's largest health system to partially resume elective surgeries Monday. Banner Health had postponed elective surgeries because of the overwhelming number of COVID-19 patients. Only surgeries that are outpatient, don't require ICU care or warrant more than one night's stay will be considered, said Dr. Marjorie Bessel, Banner's chief clinical officer.

Bessel, however, cautioned against taking the downward trend as a sign to be complacent. She said it's “incredibly important” that people continue to wear masks, socially distance and socialize only within their immediate circle. It could be 10-11 weeks until Banner hospitals get back to the workload before this winter surge.

“It is important to make sure that good news is also taken in the context that we still have uncontrolled spread within our communities here in Arizona,” Bessel said during a virtual briefing with reporters. “We need more than one strategy to bring us down from this peak we just experienced.”

Administrators of every major hospital system in the state have repeatedly called on Gov. Doug Ducey to enact more mitigation measures. The Republican governor has repeatedly rejected those calls, saying shutting down businesses will only put people out of work. He also argued that a statewide mask mandate wasn't needed when most local jurisdictions already have one.

Meanwhile, the state is ramping up its vaccination program by opening additional sites but, like other states, has had difficulty get enough doses to meet demand. Counties outside of Maricopa County, which includes Phoenix, have expressed concern about getting short-changed.

Pima County, for instance, has so far administered 59,000 doses of the vaccination and is expected to have a supply of about 77,000 doses next week. Still, Dr. Francisco Garcia, Pima County’s chief medical officer, said the county’s current supply is woefully inadequate for its population size.

“That continues to be the thing that I am losing sleep over, that we are all most concerned about,” Garcia said.

Christ said mass vaccination sites like State Farm Stadium in Glendale and the Phoenix Municipal Stadium, opening Feb. 1, are not taking away vaccines from other areas. Vaccine allocation for each county is calculated based on the population of the various priority groups.

So far, more than 380,000 vaccines have been administered in Arizona. Next week, officials expect to receive a shipment of 733,350 doses out of 973,175 that were allocated. The state will also start sending vaccines to 400 sites that include pharmacies inside supermarket chains such as Fry's and Albertson's.

The number of COVID-19 infections is thought to be higher than reported because many people have not been tested, and studies suggest people can be infected with the virus without feeling sick.