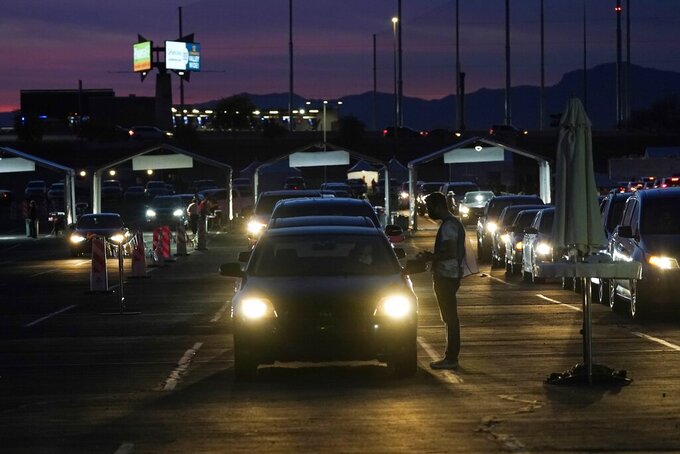 FILE - In this Jan. 12, 2021, file photo, vehicles line up so people can get their COVID-19 vaccination cards after being vaccinated in a pre-registered drive-thru in the parking lot of the State Farm Stadium in Glendale, Ariz. Arizona reported COVID-19 pandemic totals of over 800,000 confirmed cases and more than 15,000 deaths, passing the two grim milestones Wednesday, Feb. 17, 2021, after nearly 13 months since the coronavirus outbreak was first reported in the state. (AP Photo/Ross D. Franklin, File)

PHOENIX (AP) — Arizona reported COVID-19 pandemic totals of over 800,000 confirmed cases and more than 15,000 deaths, passing the two grim milestones Wednesday after nearly 13 months since the coronavirus outbreak was first reported in the state.

The Department of Health Services on Wednesday reported 1,315 additional confirmed cases and 82 new deaths, increasing the state's pandemic totals to 801,055 cases and 15,063 deaths.

Arizona was a national hot spot in both last summer’s surge and the larger one that began last fall, accelerated during the winter holidays and began declining in January.

The number of people occupying inpatient beds in Arizona peaked at 5,082 on Jan. 11 and dropped to 1,941 as of Tuesday. The summer surge's hospitalization peak was 3,517 on July 13.

The numbers of daily new cases and daily deaths also continued to drop, with decreases in seven-day rolling averages in the past two weeks, according to data from The COVID Tracking Project.

The number of infections is thought to be higher than reported because many people have not been tested, and studies suggest people can be infected with the virus without feeling sick.

Reductions in rates of new COVID-19 cases and hospitalizations were encouraging, said Dr. Marjorie Bessel, chief clinical officer for Banner Health, a Phoenix-based hospital chain. “These trends are exactly what we would like to see, and we hope that they will continue in the weeks to come.”

However, the pandemic isn’t over, and people should continue to wear masks, shrink their social circles and get the vaccine when available, Bessel said. “We need everybody to continue to do their part,” she said.

As with other states, Arizona is continuing to expand its vaccination system while pressing the federal government for additional doses.

Arizona on Thursday will open a third state-run vaccination site, a conversion and expansion of a Pima County site on the University of Arizona campus mall in Tucson. Registration for appointments at the new site began Tuesday.

Arizona previously opened two large state-run sites in metro Phoenix, and there are county-run sites across the state.

With wintry weather delaying vaccine deliveries in parts of the country, all sites in Maricopa and Pima counties administering the Pfizer vaccine had enough supplies to maintain operations. But “for other Pfizer sites, the situation is fluid and will depend on each provider's current supply," the Department of Health Services said Wednesday.

The department suggested that people in rural areas and people with appointments for first or second doses of the Moderna vaccine check with providers regarding availability.