Arizona to give Pima County go-ahead for FEMA vaccine site 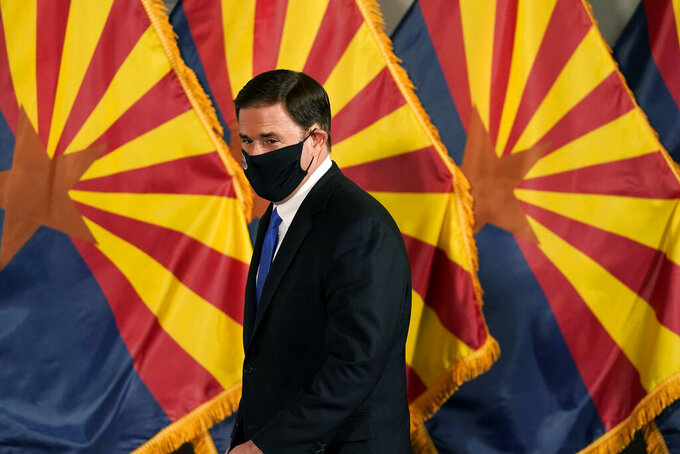 FILE - In this Dec. 2, 2020, file photo, Arizona Republican Gov. Doug Ducey arrives for a news conference to talk about the latest Arizona COVID-19 information in Phoenix. Ducey is prohibiting government mask mandates and allowing bars and nightclubs shuttered for months to open their doors without restrictions. Ducey's move Thursday, March 25, 2021, leaves in place few of the restrictions he implemented to curb the spread of the coronavirus. (AP Photo/Ross D. Franklin, Pool, File)

Ducey's top health official, Dr. Cara Christ, said she will let Pima County work with the Federal Emergency Management Agency on vaccines, but only if the county can prove it won't need state help and FEMA commits that it won't reduce the supply of vaccines flowing through her agency, among other conditions.

In a blistering letter, Christ accused FEMA staff of being so disrespectful to local and state workers that some needed counseling. And she questioned whether Pima County is capable of managing a vaccination site financially or logistically.

“Based on our recent experience with Pima County, we have concerns about their ability to adequately support your site, given their inability to financially sustain other COVID-19 related public health activities they have chosen to undertake,” Christ wrote to Tammy Littrell, acting head of FEMA's western region.

Arizona’s second-largest county had been pushing the state to approve an offer from the FEMA to establish a community vaccination center to serve its Hispanic population. The Ducey administration's initial refusal to approve prompted a tug of war between the state and county that has grown increasingly tense throughout the week, with the county asking Arizona’s congressional delegation to step in.

Ducey has argued it would be more efficient for the federal government to give Arizona more doses to administer at any of its state-run sites. Christ said the state would have had to divert resources to help with staffing, setting up proper cold storage and a whole registration system. Under pressure during a visit to Tucson on Wednesday, Ducey said he would reconsider the decision.

“I will be responding directly to Dr. Christ about her unfounded reservations and unwarranted criticisms expressed in her letter,” Huckleberry said in a statement. "Pima County has been operating multiple vaccination PODs since December without incident and with little to no state assistance.”

Christ said the state changed its mind after assurances that Pima County could provide the necessary staffing and other resources.

“We have a lot of existing sites that already have the infrastructure,” Christ said. “So, the state remains ready, willing and able to take the additional vaccine if it’s unable to be used at this FEMA operated pod.”

The county and state have been at loggerheads over millions of dollars in COVID-19 testing for which the county is seeking reimbursement. The state says the expenses were never approved.

In her letter, Christ also said she was reluctant to work with FEMA because of "significant relationship challenges," alleging FEMA staff have mistreated state, local and healthcare workers in rural Arizona and other states. She did not provide details, and her spokesman, Steve Elliott, declined to elaborate.

FEMA spokesperson Casey De Shong said the agency takes Christ's allegations of misconduct seriously, but “we are not aware of any instances in Arizona where FEMA employees have exhibited these alarming behaviors.”

In a news conference Friday, Christ defended Ducey's decision to lift remaining restrictions on large gatherings and businesses such as bars and gyms and to prohibit local governments from requiring masks. The decision was criticized by the state's major hospitals. Christ said there could be an uptick in infections, but with most older people vaccinated, hospitals are unlikely to become overcrowded.

Hours later, her agency announced that two cases were identified in Arizona of a coronavirus variant first discovered in South Africa, which spreads more readily. Scientists warn that delays in vaccinating the population increase the risk the virus will mutate in ways that make vaccines less effective.

A third of the more than 36,700 inmates in state prisons in Arizona have tested positive for the coronavirus since the pandemic began a year ago, leading to 41 confirmed COVID-19 deaths and another nine deaths suspected to have been caused by the virus.

The state is preparing to move its mass vaccination sites indoors as summer approaches. An outdoor state-run COVID-19 mass vaccination site in the Phoenix suburb of Chandler will be replaced April 5 by a drive-thru operation inside a large business warehouse in Mesa. The new vaccination site will use 30,000 square feet (2,787 square meters) of a 500,000-square-foot (46,451-square-meter) distribution center belonging to Dexcom Inc.

The 24-hour site at State Farm Stadium in Glendale will convert to overnight operations starting April 5. Additional indoor sites are being sought, the department said.

There were 626 COVID-19 patients occupying inpatient rooms as of Thursday, down from 628 as of Wednesday but only a fraction of the pandemic high of 5,082 on Jan. 11, according to the state's coronavirus dashboard.

This story has been corrected to reflect that hospitalizations as of Thursday were down from as of Wednesday.