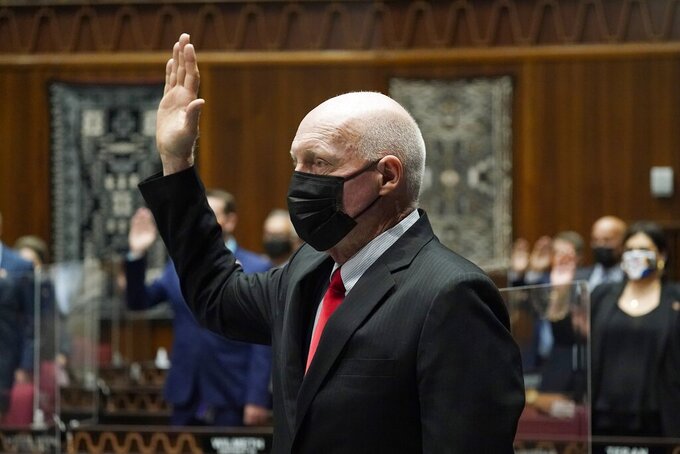 FILE - In this Jan. 11, 2021, file photo, state Rep. Rusty Bowers, R-Mesa, is sworn in during the opening of the Arizona Legislature at the state Capitol, in Phoenix. A budget deal struck between Republican leaders Bowers and Arizona Senate President Karen Fann, R-Prescott, and Gov. Doug Ducey includes implementing a flat 2.5% income tax that cuts $1.5 billion a year from state revenue and keeps higher earning taxpayers from having to directly pay a new 3.5% surcharge to fund schools. (AP Photo/Ross D. Franklin, Pool, File)

PHOENIX (AP) — A budget deal struck between Republican leaders of the Arizona Legislature and Gov. Doug Ducey includes implementing a flat 2.5% income tax that cuts $1.5 billion a year from state revenue and keeps higher-earning taxpayers from having to directly pay a new 3.5% surcharge to fund schools.

The agreement would cap the maximum any taxpayer will owe with a new voter-approved tax surcharge for education at 4.5% — the current top tax rate. It envisions using $836 million in state general fund revenue in the coming budget year to make up the difference so the full 3.5% surcharge voters approved in November in Proposition 208 will go to schools, if the measure survives a state Supreme Court challenge.

The deal struck by Senate and House leaders with the Republican governor essentially cuts 25% from personal income tax revenue, with most of the savings going to higher-earning taxpayers.

The deal also cuts commercial property tax rates, pays down state pension and other debts and will increase the state's super-low weekly unemployment benefit from $240 to $320 a week once a set of triggers are met. Lawmakers had been considering a pair of competing proposals to raise unemployment pay.

Republicans who hold one-vote majorities in both the House and Senate were briefed on the package Monday, and House Majority Leader Ben Toma said late Monday night that GOP House members were mulling over the package. The budget has not been formally introduced.

Some Republicans were wary, while others were supportive even before receiving the full details.

"We have a state that has a massive surplus, and we can take care of the needs of the state and at the same time give money back to the taxpayers,” Rep. Jeff Weninger, a Chandler Republican, said Monday.

Republican Sen. Paul Boyer of Glendale was critical of several parts of the plan, including the tax cut.

“Not enough ongoing for Universities,” Boyer said in a text message Tuesday, after being briefed. “Need more fiscal responsibility in paying down debt, more in the Rainy Day fund. Not prudent to cut so much in taxes.”

Democrats are virtually certain to unanimously oppose the deal, since it envisions a huge tax cut they dislike because they consider state government massively underfunded, especially K-12 schools. They instead want to boost teacher pay, which is among the lowest in the nation, and invest in other state priorities.

“Giving away $1.5 billion in long-term permanent tax cuts is something that we would not support,” Rep. Reginald Bolding, the House minority leader, said. “We believe that those dollars could be re-invested in teacher salary. Let’s make Arizona teachers Top-25 in the nation, and add a $7,000 pay increase. (Democrats) had a budget that would do that.“

Toma led the charge on the income tax cuts, which eliminate the state's graduated income tax structure in favor of a one-level tax rate that's lower than the current bottom tier rate of 2.59%. The current maximum rate is 4.5%, which would reach 8% with the Proposition 208 surcharge.

Toma said the new maximum rate of 4.5% would not affect the new revenues created by the 3.5% Invest in Education initiative because the budget deal taps general fund revenue to make up the difference. Proposition 208 imposes a 3.5% tax surcharge on income above $250,000 for individuals or above $500,000 for couples. Supporters say it could raise about $940 million a year for schools, although the Legislature’s budget analysts estimate it would bring in $827 million a year.

“It changes where part of the money comes from,” Toma said. “It doesn’t actually change the total money available to education.”

The changes are possible because of a big increase in revenue from income and sales taxes, which occured in Arizona and other states despite fears the pandemic would hammer state revenues. The Legislature's budget analysts show revenue for the budget year that ends on June 30 is running nearly $700 million above projections and they estimate fiscal year 2022 revenues will be nearly $1 billion above forecasts, on top of a current budget surplus.

Ducey in Janaury proposed $600 million in income tax cuts phased in over three years. His $12.6 billion proposal for the budget year that starts July 1 would shave nearly 10% of revenues by the time it is fully phased in.

In contrast, the deal Ducey made with the Legislature would cut about 25% of the state's income tax revenue. It will be phased in by the 2024 budget year. Toma said spending would be about $13 billion.

Toma laid out the basics of the new budget deal in an interview with The Associated Press, without providing the actual documents. They were later obtained by the AP. In addition to the income tax cut, the deal also lowers the property tax rate for commercial buildings. Most of that cash goes to local governments, but rising property values mean there should not be a major revenue impact.

The deal also fully exempts veterans pensions from imcome tax, which Ducey proposed last year before the pandemic forced a speedy end to the legislative session after lawmakers passed a bare-bones budget that included only basic spending. That proposal got pushback from some Republicans before the coronavirus sidelined regular budget talks.

The new deal would provide raises for state troopers and corrections officers, and to thousands of state Department of Economic Security, child safety and select other state workers. Most state workers haven't had a raise in a decade. It will use $300 million to shore up the pension plan for state law enforcement officers.

Infrastructure spending also gets a big influx of cash, with $200 million earmarked for new highway and bridge construction, $100 million for roadway repaving and $140 million for internet broadband projects to serve rural areas. The deal also includes $200 million for a new drought mitigation fund.

Universies and community colleges would get an additional $130 million for various programs. And there is new money for a chronically underfunded K-12 building and maintenance fund.

There's also about $100 million in new K-12 school spending, but there is no provision to repay the full $930 million schools are still owed from budget gimmicks used a decade ago. Tens of thousands of teachers went on strike in 2018 and won a 20% pay increase but also demanded other boosts and said there should be no new tax cuts until state school funding greatly improved.