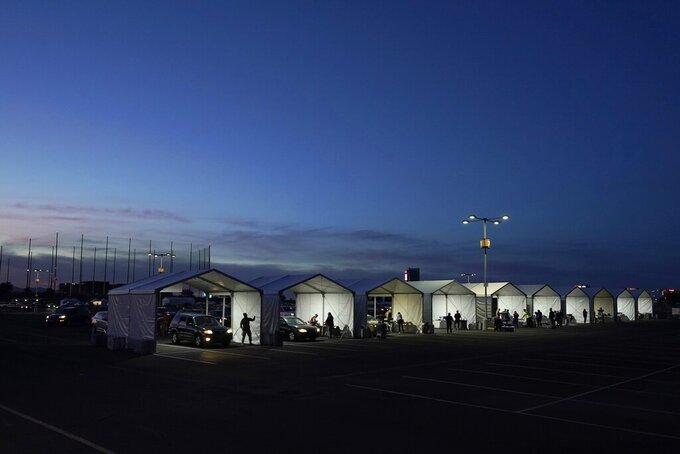 FILE - In this Jan. 12, 2021, file photo, several tents are set up so people who have registered can get their COVID-19 vaccinations as they drive-thru the parking lot of the State Farm Stadium in Glendale, Ariz. Gov. Doug Ducey used his executive powers Monday, April 19, 2021, to prohibit local and regional governments from making "vaccine passports" a requirement for people to enter businesses or get services, calling it an encroachment on the private medical information of Arizona residents. (AP Photo/Ross D. Franklin, File)

PHOENIX (AP) — Gov. Doug Ducey used his executive powers Monday to prohibit local and regional governments from making “vaccine passports" a requirement for people to enter businesses or get services, calling it an encroachment on the private medical information of Arizona residents.

The Republican governor signed an executive order that also bans state agencies or businesses that contract with state government from requiring the vaccine passports that prove people have been vaccinated against the coronavirus.

“While we strongly recommend all Arizonans get the COVID-19 vaccine, it’s not mandated in our state — and it never will be,” Ducey said in a statement. "Vaccination is up to each individual, not the government.”

Businesses that decide they want to require vaccine passports — along with health care providers, child care facilities, schools and universities — are exempted from the ban.

Later on Monday, Ducey rescinded his executive order from July that directed K-12 schools to require face masks. The move punts decisions about masking to K-12 school districts and charter schools, which maintain the right to institute and enforce policies to mitigate against COVID-19 spread, including the use of masks.

“Nearly 2 million Arizonans are fully vaccinated against COVID-19, with many teachers and school faculty now fully vaccinated after being some of the first in line for vaccine prioritization,” Ducey said in a statement. “Teachers, families and students have acted responsibly to mitigate the spread of the virus and protect one another, and our school leaders are ready to decide if masks should be required on their campuses.”

Ducey said he made the decision “in alignment” with guidance from the U.S. Centers for Disease Control and Prevention, but that guidance says the “universal and correct use of masks” is essential to safe in-person schooling.

Superintendent of Public Instruction Kathy Hoffman, a Democrat, said the decision destabilizes schools during an already challenging year. She urged school boards and administrators to transparently make “evidence-based decisions that build trust in the safety of our schools.” In a statement, she called Ducey's move another example of “Arizona's embarrassing response to a virus that has claimed over 17,000 lives.”

Meanwhile, Arizona’s top three public universities are considering whether to require students, faculty and staff to be vaccinated. University of Arizona President Robert Robbins said he has been in discussions with his counterparts at Arizona State University and Northern Arizona University about possibly taking a united stance.

“I would favor mandating it,” Robbins told reporters during his weekly media briefing.

Robbins, who is in favor of vaccine passports for the campus, said he expects to make a decision before the fall semester on the issue that has divided colleges across the country.

The state’s coronavirus dashboard listed the total number of cases since the pandemic began as 854,453. The death toll remained 17,153.

The state’s seven-day rolling average of daily new cases dropped over the past two weeks, falling from 653.4 on April 1 to 575.6 on Saturday.

The dashboard also shows that nearly 4.5 million vaccine doses have been administered in the state.

More than 2.7 million Arizona residents — or 38.1% of the state's population — have received at least one shot and over 1.9 million people are fully vaccinated.