In Arizona, groups aim for 1 million voters to oust Trump 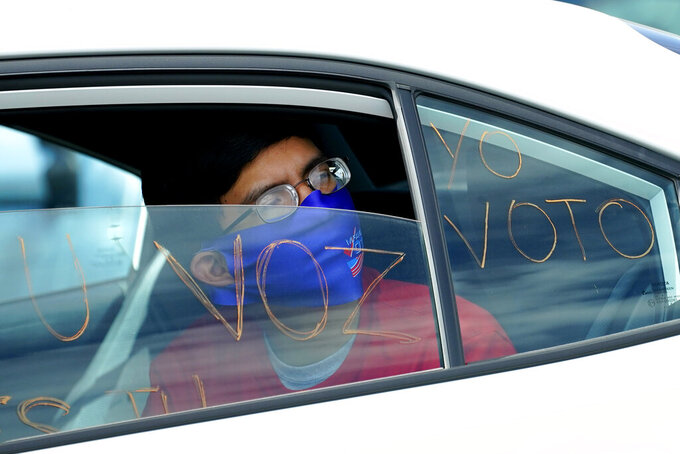 A man looks out of a car window as he takes part in a car rally Thursday, Aug. 13, 2020, at the Capitol in Phoenix. A coalition of voting rights groups in Arizona have banded together with a lofty goal of getting one million people to vote this November. (AP Photo/Matt York)

PHOENIX (AP) — A coalition of voting rights groups in Arizona has banded together with the lofty goal of getting one million people to vote against President Donald Trump this November.

The new group, Mi AZ, launched Thursday with a car rally outside state government offices in Phoenix. It’s targeting under-35 voters along with people of color, hoping to defeat Trump in what is largely considered a battleground state.

The campaign comes as voter registration efforts have been stymied by the pandemic, forcing groups all over the country to use phones and the internet instead of approaching people in person to try to get them registered. That’s resulted in a 70% drop in voter registrations in 11 states and the District of Columbia compared to 2016, according to The Center for Election Innovation and Research.

“This is a set of organizations that have been fighting together, many have been collaborating together, since the passage of SB 1070 in 2010,” said Progressive Now Arizona Institute executive director Emily Kirkland, referencing the tough-on-immigrants law.

She said the coalition has grown the capacity to run efficient and large-scale campaigns to turn voters out.

At least one of the groups involved, Central Arizonans for a Sustainable Economy, has resumed door-to-door registration efforts, but the campaign will be held most via text messages, digital ads and phone banking.

The effort also comes as Arizona is increasingly considered a battleground state where Latinos in particular could have a major impact, but at a time when they are being disproportionately affected by the coronavirus with higher rates of infection, hospitalization and job loss.

Youths also have lower voting turnout in Arizona than their older counterparts. According to Census data, 40 percent of eligible voters who are between ages 18 and 24 cast a ballot in the 2016 presidential election; nearly 52% of those 25 to 34 voted.