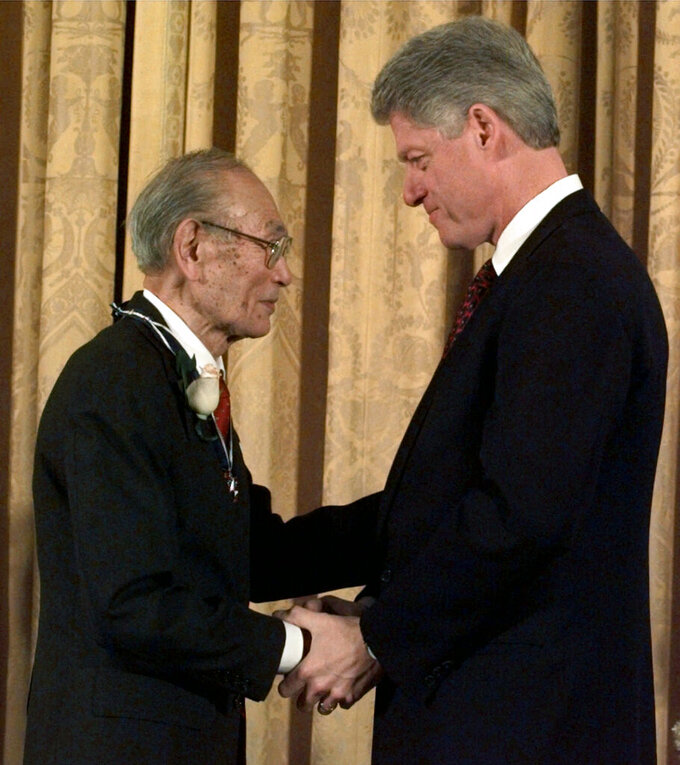 FILE - In this Jan. 15, 1998 file photo, then President Clinton presents Fred Korematsu with a Presidential Medal of Freedom during a ceremony at the White House. Arizona is honoring late civil rights icon Korematsu, whose fight against Japanese American internment went all the way to the U.S. Supreme Court. Gov. Doug Ducey on Thursday, April 15, 2021, signed legislation establishing a “Fred Korematsu Day of Civil Liberties and the Constitution” on Jan. 30, Korematsu’s birthday. The legislation comes as the nation continues to see a rise in anti-Asian crimes that started with the pandemic. (AP Photo/Dennis Cook, File)

“Fred Korematsu’s bravery and dedication to gaining justice for himself and others is admirable, and reflects the character of our nation," Ducey said in a statement.

Korematsu, who was born in Oakland, California, was convicted in 1942 of disobeying military orders for the removal of Japanese Americans from their homes. After Japan's attack on Pearl Harbor during World War II, the federal government set up internment camps, including two in Arizona, to forcibly detain those of Japanese ancestry.

Korematsu was placed in an internment camp in Utah.

In 1944, his appeal of his conviction went before the U.S. Supreme Court and was denied. But in 1983, a federal judge overturned the decision.

Korematsu dedicated himself to civil rights until his 2005 death.

The legislation comes as the nation continues to see a rise in anti-Asian crimes that started with the pandemic. Among them was the March 16 shootings in Atlanta that killed eight people, including six Asian American women.

A coalition of local Asian American groups, including the Arizona chapter of the Japanese American Citizens League, sent Ducey's office a letter last week urging him to address the issue.

“We ask you to summon the breadth of your executive powers to speak out against anti-Asian hate,” the letter states.

The groups are calling for the Republican governor to formally and publicly condemn anti-Asian violence and rhetoric. They also want him to declare Asian Americans and Pacific Islanders as “integral to the American family" and allocate more resources for the safety of Asian Americans.

Representatives for Ducey did not immediately return a message Thursday seeking comment on the letter.