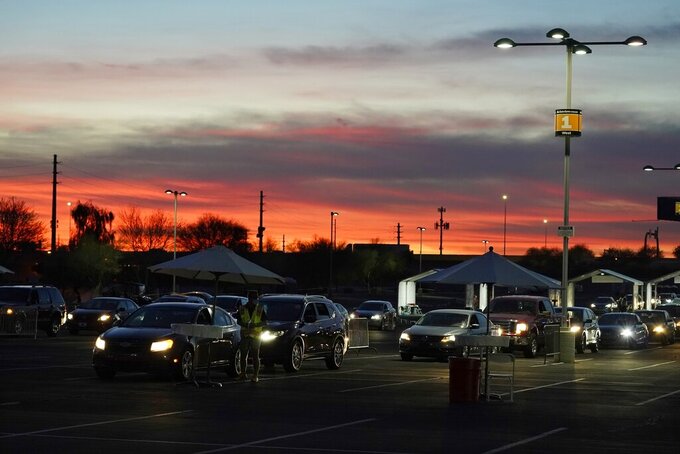 FILE - In this Jan. 12, 2021, file photo, vehicles line up so people can get their COVID-19 vaccination cards after being vaccinated in a pre-registered drive-thru in the parking lot of the State Farm Stadium in Glendale, Ariz. Arizona reported 4,748 additional known COVID-19 cases and 209 deaths on Tuesday, Jan. 26 the one-year anniversary of the announcement of the state's first confirmed coronavirus case in the outbreak that has since claimed thousands of lives statewide. (AP Photo/Ross D. Franklin, File)

PHOENIX (AP) — Arizona reported 4,748 new known coronavirus cases and 209 deaths on Tuesday, the one-year anniversary of when the state confirmed its first coronavirus case in the outbreak that has since claimed thousands of lives statewide.

The latest numbers reported by the Department of Health Services increased the state's pandemic totals to 732,643 known cases and 12,448 deaths.

The outbreak has seen Arizona become a national hot spot during both the surge last summer and the even deadlier one this fall and winter.

The Department of Health Services announced the state’s first case on Jan. 26, 2020, saying the infected person was a Maricopa County resident who had recently returned from travel to Wuhan, China, a city that was at the epicenter of the outbreak.

Arizona in recent weeks was the U.S. state with the worst COVID-19 diagnosis rate, which is a state's population divided by the number of new cases over the past week. As of Tuesday, Arizona's rate was second-worst, behind Rhode Island, with one person infected in the past week out of every 145 residents.

Recently, as the state continue to ramp up its vaccination program, there have been indications that the outbreak is slowing in Arizona after spikes partly attributed to travel and laxity toward public health guidance during fall and winter holidays.

The number of new reported cases has dropped over the past two weeks, with Arizona's seven-day rolling average of daily new cases dropping from 9,428.4 on Jan. 11 to 6,944.7 on Monday, according to data from Johns Hopkins University and The COVID Tracking Project.

Meanwhile, the number of hospitalized COVID-19 patients continued to drop from the pandemic high of 5,082 on Jan. 11, with 4,229 occupying inpatient beds as of Monday, according to the state's coronavirus dashboard.

— The state is newly requiring health care providers and local health agencies that administer COVID-19 vaccines to report data on the pace of vaccinations, the Department of Health Services announced Tuesday.

The advisory issued by Gov. Doug Ducey is intended to allow the state to reallocate vaccination doses “to where they can be rapidly administered," the department said in a statement.

— Grand Canyon University on Tuesday in coordination with Maricopa County opened a COVID-19 by-appointment COVID-19 vaccination site with both drive-thru and walk-in options.

The walk-in option is intended to serve people who may not have a vehicle to travel to other dispensing sites, the university said.

Initially, the GCU site would focus at providing second doses to people who already received first does from other Maricopa County regional sites.