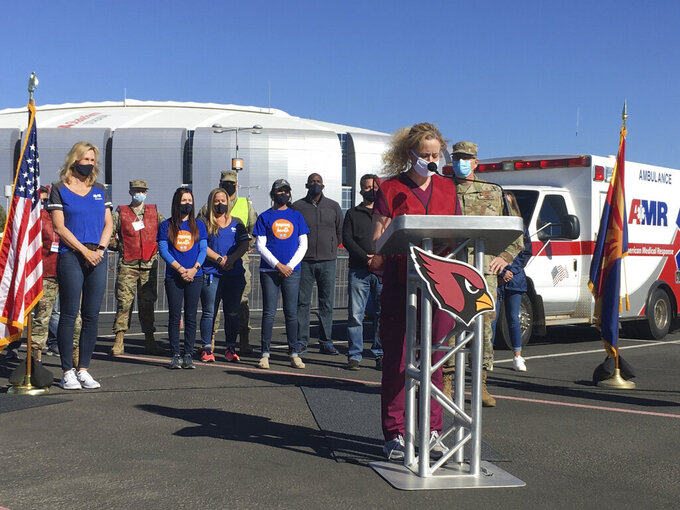 Dr. Cara Christ, director of the Arizona Department of Health Services, speaks to reporters in the parking lot of the State Farm Stadium in Glendale, Ariz., on Monday, Jan. 11, 2021. The Arizona Cardinals' stadium opened as a vaccination site Monday that will be a 24-7 operation. (AP Photo/Terry Tang)

PHOENIX (AP) — COVID-19 hospitalizations in Arizona reached another high Monday as the state with one of the worst diagnosis rates in the U.S. ramps up its vaccine efforts, including turning an NFL stadium into a round-the-clock mass vaccination site.

A record 4,997 people were hospitalized because of the coronavirus and 1,158 were in intensive care, the Arizona Department of Health Services said. Those numbers are significantly above what the state experienced during its last surge in July.

One in every 115 people in Arizona was diagnosed with COVID-19 over the past week.

As the numbers spike, Arizona is getting ready to embark on the next phase of its vaccine rollout plan.

Dr. Cara Christ, Department of Health Services director, and other officials on Monday ushered in the opening of the Arizona Cardinals’ stadium as a vaccination site. Christ and other medical staff vaccinated around two dozen educators and state troopers.

State Farm Stadium in Glendale will be a round-the-clock drive-thru operation. The goal is to vaccinate around 6,000 people a day, Christ said. For now, the site will be by appointment only. While some have complained about being unable to register online or or by phone, Christ encouraged people to keep trying.

“There's still plenty of appointments available. We've had a huge response and a large number of people able to get through,” Christ said. “So just keep trying. We always know there's gonna be increased demand right away.”

Emily Alexander, 37, was the first person Christ vaccinated. A fourth-grade teacher in the Phoenix suburb of Paradise Valley, she said she hopes it means there’s a chance of being reunited with students and colleagues in person before the end of the year.

“I miss the kids so much,” Alexander said. “I’m really looking forward to seeing them and their families, being able to hug them. That has just been so tough.”

Maricopa County, which includes Phoenix, is starting to vaccinate the next tier of eligible groups, including teachers, people age 75 and older and police and firefighters. Several other counties already have expanded vaccine eligibility beyond health care workers and those living and working in care homes and began registering those groups to receive the vaccinations this month.

Leaders of Arizona’s largest hospital systems and others have repeatedly called on Gov. Doug Ducey, a Republican, to implement tighter restrictions to stop the virus’s spread.