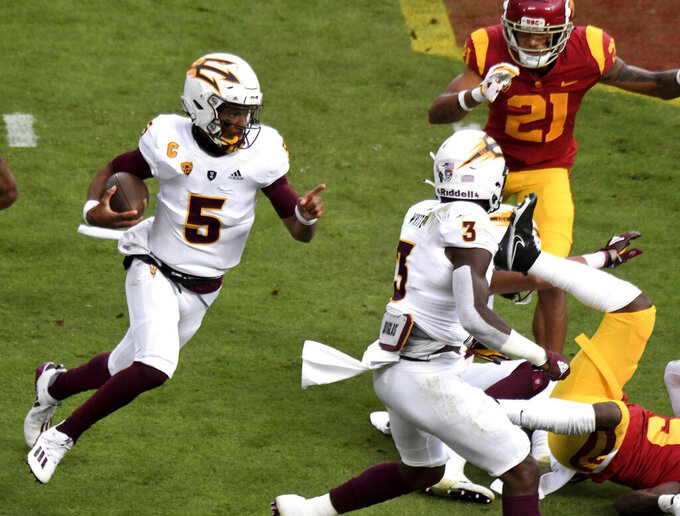 Quarterback Jayden Daniels #5 of the Arizona State Sun Devils scrambles against USC Trojans in the first half of a NCAA football game at the Los Angeles Memorial Coliseum in Los Angeles on Saturday, November 7, 2020. (Keith Birmingham/The Orange County Register via AP)

TEMPE, Ariz. (AP) — The best thing for Arizona State after a disappointing opening loss would have been to get back on the football field and play another game.

A month later, it's finally going to happen.

Stymied for weeks by positive COVID-19 cases within the program, the Sun Devils will play UCLA in their home opener Saturday night after having three straight games get canceled.

“We actually get to play a game again,” Arizona State coach Herm Edwards said. “We played one game, didn’t turn out like we had liked, and now we had to wait all this time to play again. And so I think our players are very excited about playing football.”

Arizona State (0-1) controlled its opener against Southern California on Nov. 7 for 57 minutes, only to give up two touchdowns in the final three minutes and lose 28-27.

Not long after, Edwards, multiple players and staff tested positive for the coronavirus, wiping out the Sun Devils' home opener against California. Due to contact tracing and testing protocols, the next two games, at Colorado and at home against Utah last weekend, were also canceled.

Arizona State finally gets to play a game again, but it's been so long it's almost as if they're at the start of a new season.

“I don’t look at that time off as a positive advantage,” Sun Devils offensive coordinator Zak Hill said. “It was a tough period. We tried to handle it the best we can in meetings, trying to keep guys on the same page, active and engaged. That’s all you can do.”

UCLA (2-2) had its game against Utah on Nov. 14 canceled due to coronavirus issues, but was able to schedule a last-minute game against California the following day.

“You could say they’re fresh,” UCLA coach Chip Kelly said. “You know, we’ve played four games in a row and we’ve got injuries to deal with. I don’t think we worry about that stuff. We worry about our preparation.”

One of UCLA's top priorities will be trying to slow down Arizona State quarterback Jayden Daniels.

As a freshman last season, Daniels threw for 267 yards and three touchdowns and added 67 yards and another score in a 42-32 loss to the Bruins. Arizona State has a new offensive coordinator (Hill) this season, so the film from that game won't help UCLA all that much.

Since the Sun Devils have only played once this season, the Bruins have a small sample size to figure out how to stop Daniels.

“He’s a true dual threat,” Kelly said. “We faced them last year, extremely talented, as talented as any quarterback that we will face because he can hurt you with both his arm and his legs, (and) we only have one game to go off of.”

UCLA is hoping to get quarterback Dorian Thompson-Robinson back after he missed the past two games due to COVID-19 contact tracing. He was expected to be back at practice this week, but Kelly did not say if he would play.

Chase Griffin started the past two games, but the Bruins relied more heavily on the run.

Demetric Felton ran for 167 yards against Oregon and topped that with 207 yards rushing last week against Arizona before pulling up with what appeared to be a hamstring injury in the fourth quarter. Kelly said this week that Felton returned to practice and should be fine for Saturday's game.