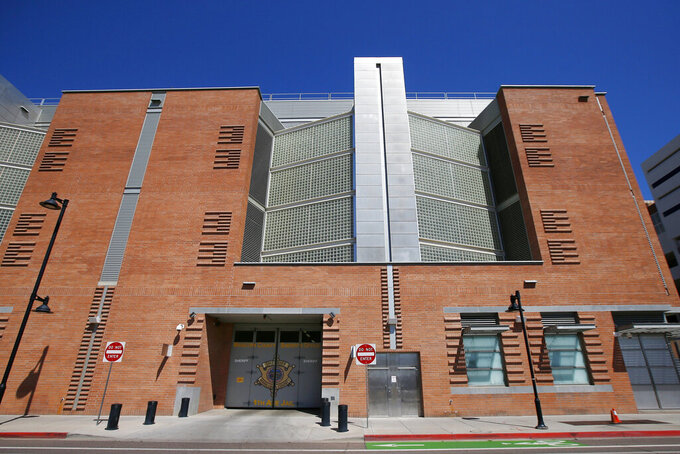 FILE - This March 21, 2020, file photo, shows the Maricopa County 4th Avenue Jail in downtown Phoenix. The number of inmates in Arizona's prisons and in some county jails in the state have decreased since the start of pandemic. The decrease reflects a slowdown in the state's court system that has held far fewer criminal jury trials over the last year as it took steps to prevent the coronavirus from spreading at courthouses. (AP Photo/Ross D. Franklin, File)

PHOENIX (AP) — The number of inmates in Arizona’s prisons has declined 11% since the start of pandemic, reflecting a slowdown in the state’s court system that has held far fewer criminal jury trials over the last year as it took steps to prevent the coronavirus from spreading at courthouses. Corrections officials say they are seeing fewer sentenced inmates being sent to prison from counties and fewer revocations of probation and community-supervision releases that would send people back behind bars. Defense lawyers say people charged with crimes are reluctant to accept plea offers out of fear that they might be exposed to COVID-19 if they were sentenced to Arizona’s prisons, where 31% of inmates have tested positive over the course of the pandemic and where 50 inmates have either been confirmed or suspected to have died from the virus.

Pima County hasn’t held a criminal jury trial since March 2020 and has called them off through next month. Maricopa County went a few months in 2020 without criminal trials, but it resumed them during the fall in limited numbers, because it has a small number of courtrooms that are equipped with plexiglass barriers and spacious enough to allow jurors to be distanced.

In the four years before the pandemic, Arizona’s prison population hovered around 42,000. It started dropping in March and stood at 37,224 on Friday, according to corrections records.

While at least 300 non-violent inmates have been released from country jails in Arizona over the last year in a bid to lower virus risks, the state has refused calls for early releases of prisoners as a prevention measure.

Corrections officials say it’s difficult to say whether the state will have roughly 42,000 inmates some time after the pandemic ends. But lawyers and officials who work in county criminal justice systems said they believe the numbers of will creep back up.

“Everything that I have seen contributing to the decline is based on temporary things, so I think this is temporary,” said Christine Jones, a trial supervisor in the Maricopa County Office of the Public Defender.

More than half of Arizona’s 15 counties also have seen decreases in the number of inmates in their jails.

The jail population in Maricopa County, which operates the largest county jail system in Arizona, has had a 24% decrease in its jail population, from 7,100 in December 2019 to about 5,400 this week.

The most significant factor in lowering the county’s jail population has been police agencies that are citing and releasing people for certain nonviolent offenses, rather than booking, in an attempt to limit their contact with jails during the pandemic, said Sheriff Paul Penzone.

Penzone said his office is examining data to determine whether the cite-and-release approach taken during the pandemic will have any effects on crime rates and to examine the financial savings from having fewer people locked up.

While acknowledging that some offenders still need to be imprisoned, Pima County Attorney Laura Conover, a newly elected prosecutor who believes the state should rely on prison far less, said the decline in the prison population offers a chance to consider whether the state wants to keep so many people locked up.

Yavapai County Attorney Sheila Polk, whose office didn’t hold a felony trial for three months last year but has since resumed, said her office is already working with others in the legal system to reduce the backlog.

Polk said the Arizona Supreme Court’s suspension of a speedy-trial rule is set to expire at the end of March, meaning her office needs to be prepared to take a number of cases to trial unless the rule suspension is extended.

“You can’t stop arresting people and you can’t neglect public safety,” Polk said. “And you when you arrest somebody, there are a series of things in the courtroom that have to occur. We have managed to do it.”

State prisons and some county jails in Arizona have been hard hit by the virus.

More than 11,000 inmates in Arizona’s prisons have tested positive for the virus during the pandemic, leading to 31 confirmed COVID-19 deaths and another 19 deaths suspect to have been caused by the virus.

More than 2,600 people who work in state prisons also have tested positive. Corrections officials have declined to say whether any staff members have died from the virus.

In county jails across Arizona, more than 3,500 inmates and nearly 900 employees have tested positive since last spring.