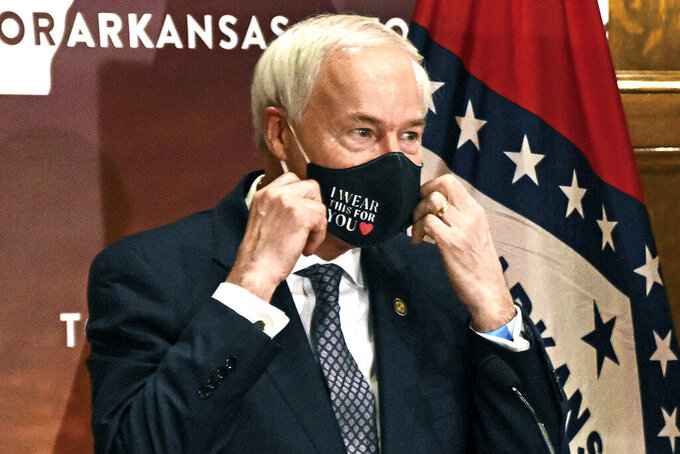 FILE - In this July 20, 2020 file photo, Arkansas Gov. Asa Hutchinson removes his mask before a briefing at the state capitol in Little Rock. Arkansas lawmakers on Wednesday, April 28, 2021, approved a reworked bill that aims to preempt federal gun restrictions following objections from the governor, law enforcement and prosecutors that a previous proposal went too far and jeopardized public safety. (Staci Vandagriff/The Arkansas Democrat-Gazette via AP, File)

LITTLE ROCK, Ark. (AP) — Arkansas Gov. Asa Hutchinson on Tuesday set a goal to have half of the state's population at least partially vaccinated against the coronavirus within the next three months.

Hutchinson set the goal as the state continues to lag most of the country in vaccinations and as President Joe Biden set a goal to have shots delivered to 70% of adult Americans by July 4. Hutchinson's goal will require more than 467,000 Arkansans to get shots by early August.

“This is a big challenge for us,” Hutchinson said at his weekly briefing on the virus.

Health officials announced a series of “pop-up" clinics they're holding around the state in the coming weeks to offer the vaccine in order to reach that goal.

They include one planned at the Arkansas Travelers minor league baseball game in North Little Rock on Tuesday, and at several high school graduation ceremonies planned at War Memorial Stadium in Little Rock this month. Other events are planned at events around the state, including at festivals, farmer's markets and car shows.

Nearly 36% of the state's population has received at least one dose of the vaccine so far, according to the Centers for Disease Control and Prevention.

State health officials said they remain concerned about variants of the virus, which have been detected in 29 of the state's 75 counties so far. State Health Secretary Dr. Jose Romero said the state is starting to see more cases involving children.

“One way to protect (children) is to form a cocoon around them by adults and adolescents receiving the vaccine," he said.