Arkansas approves new date for concert shut down by virus 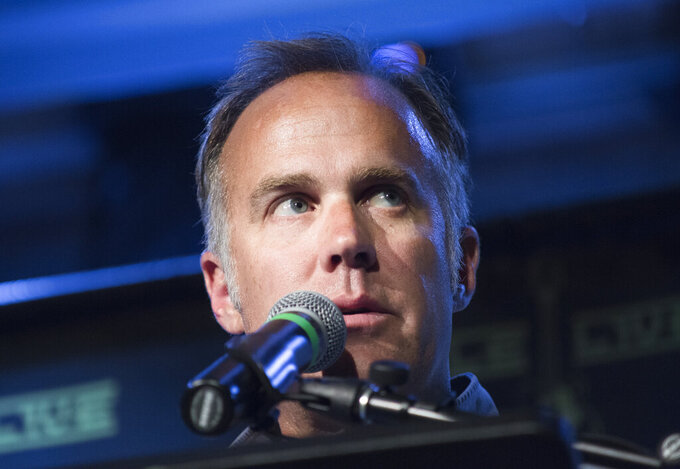 Mike Brown, vice president of Temple Live, speaks during a press conference at the Temple Live concert venue, Thursday, May 14, 2020, in Fort Smith, Ark. The Arkansas Department of Health issued a cease and desist order on a planned concert, what would have been one of the first in the nation to start up again. Travis McCready of the band Bishop Gunn was scheduled to perform at the venue. (Charlie Kaijo/The Northwest Arkansas Democrat-Gazette via AP)

LITTLE ROCK, Ark. (AP) — A country-rock concert that Arkansas officials said could not happen on Friday because of restrictions to control the coronavirus will be allowed to take place next week.

The Department of Health said Friday that it approved the plan by TempleLive, a Fort Smith theater, to move its show by singer Travis McCready to Monday night. The theater had initially planned the show for Friday, three days before the state is allowing indoor entertainment venues to reopen. The concert is expected to draw at least 200 people.

“They made some modifications that allowed us to approve it,” said Dr. Nathaniel Smith, the state's health secretary.

The state had ordered operators of the former Masonic Temple to cancel or postpone the show and temporarily pulled the facility's alcohol permit until it agreed to do so. TempleLive said Thursday it would postpone the show.

A Health Department spokeswoman said the primary changes were the date and adding a requirement that anyone over the age of 10 wear a mask. The plan also requires performers to be at least 12 feet away from the audience and all patrons to have their temperature checked at the door.

The theater is reducing its capacity from 1,100 people to 239 for the event.

Arkansas is allowing arenas, theaters and other indoor entertainment facilities to reopen Monday, but with a limit of 50 people in the audience. That limit can be increased to one-third capacity, but only after the state approves the venue's plan.

Gov. Asa Hutchinson also said the state has approved plans for all three of the state's casinos to reopen on Monday. The state last week said casinos could open at one-third capacity if they would enforce new social distancing rules approved by the Health Department.

The Health Department said at least 4,463 people in Arkansas have tested positive for the coronavirus, an increase over the 4,366 reported Thursday. The true number is likely higher because many people have not been tested, and studies suggest people can be infected and not feel sick.

Ninety-eight people in the state have died from COVID-19, the illness caused by the virus.

Smith also said the state is loosening its requirement that anyone undergoing elective surgery have a negative coronavirus test before their procedure. Starting Monday, Smith said, the requirement will be eased from 48 hours before the procedure to 72 hours.

The requirement sparked a legal challenge from the state's only surgical abortion clinic, which said the rule was preventing many women from undergoing the procedure. A federal judge last week blocked the clinic's request to prevent the state from enforcing the requirement on three women who were nearing the state's limit on when an abortion can be performed.