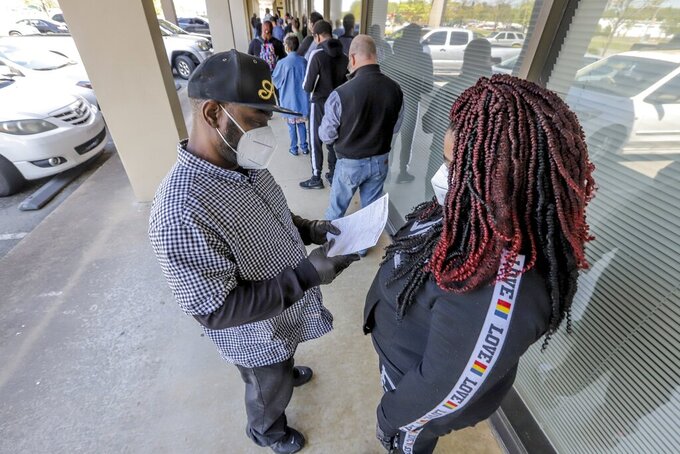 In this Thursday, April 16, 2020 photo, Keith Davis, left, and his friend Jakia Hart, left, wait outside the Arkansas Workforce Center in Little Rock, Ark. The pair said they were there because of COVID-19 related layoffs. The centers offer unemployment insurance, employment assistance and assistance for needy families, with over 30 such centers around the state.. (John Sykes Jr./The Arkansas Democrat-Gazette via AP)

LITTLE ROCK, Ark. (AP) — The first death of a health care worker in Arkansas is among two additional deaths in the state due to COVID-19, state officials said Sunday.

Gov. Asa Hutchinson also said nearly 2,000 inmates will be considered for early release in response to questions about possible compassionate release of people in state prisons.

The death of a worker at Jefferson Regional Medical Center in Pine Bluff is one of two that bring to 40 the number who have died in the state due to COVID-19, the disease caused by the virus, according to state Health Secretary Dr. Nathaniel Smith.

Hutchinson said 348 inmates at the state’s maximum security unit have tested positive for the virus, an increase of 118 from Saturday. The governor said he has asked the state parole board to review 1,990 non-violent, non-sex offender inmates statewide who are due for release within six months for possible early release.