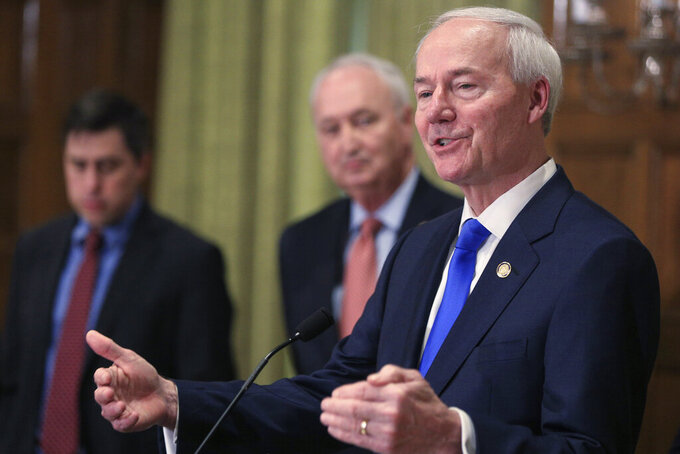 LITTLE ROCK, Ark. (AP) — Arkansas' governor on Friday allowed cities to enact measures requiring masks in public to prevent the spread of the coronavirus, relenting after opposing such mandates at the state or local level.

Gov. Asa Hutchinson signed an executive order that would allow cities to enact a “model ordinance" drafted by the Arkansas Municipal League requiring masks. The order does not require masks statewide and the local ordinance would not include penalties for not complying.

“It's an option for cities to give them more flexibility if they have a community in which they might have a surge in cases," Hutchinson said.

Hutchinson, a Republican, has opposed a statewide mask mandate and has previously said cities can't impose their own restrictions. At least two Arkansas cities, however, have enacted their own mask requirements but Hutchinson has not taken any steps to challenge them.

Hutchinson signed the order the day after Texas Gov. Greg Abbott ordered face coverings to be worn in public in most parts of the state.

He also allowed the requirement days after several mayors in northwest Arkansas, which has been hit hard by the recent surge in cases, asked the governor for stronger directives on wearing masks for the region.

Under Hutchinson's order, local law enforcement and city officials would act in a “support capacity” to educate and encourage people to wear face masks.

The author of the mask ordinance in Fayetteville, in the state's northwest, called Hutchinson's order a good first step, but said there needs to be further discussion about giving cities the ability to enforce such requirements and additional funding for local public health campaigns about them. Fayetteville's ordinance includes a penalty for businesses that “willfully neglect" the requirement.

“If we are saying today that we are never going to have to do enforcement, we may be making a promise we may not be able to keep," Fayetteville Alderman Matthew Petty said.

Health officials on Friday said at least 22,622 people in the state have tested positive for the virus, an increase of 547 cases since Thursday. The Health Department said 6,177 of those cases are active, meaning they don't include people who have died or recovered.

The true number of cases in Arkansas is likely higher because many people have not been tested, and studies suggest people can be infected and not feel sick.

Two more people in the state have died from COVID-19, the illness caused by the virus, bringing the state's total fatalities to 281. The number of people hospitalized rose by 13 to 285.

Hutchinson's decision on masks comes as the state is in the middle of a dramatic uptick in coronavirus cases and as health officials say they're concerned about that number growing further the July 4 holiday weekend.

The number of active cases since Memorial Day has grown by 271 percent. The state has five times as many active cases among non-incarcerated people as it did heading into Memorial Day weekend, state Health Secretary Dr. Nathaniel Smith said.

“You're five times more likely to be in contact with someone who's an active case," Smith said. “Things you might have gotten away with over Memorial Day weekend are going to be riskier this weekend, so it's more important this weekend to take those precautions to prevent COVID-19 spread."