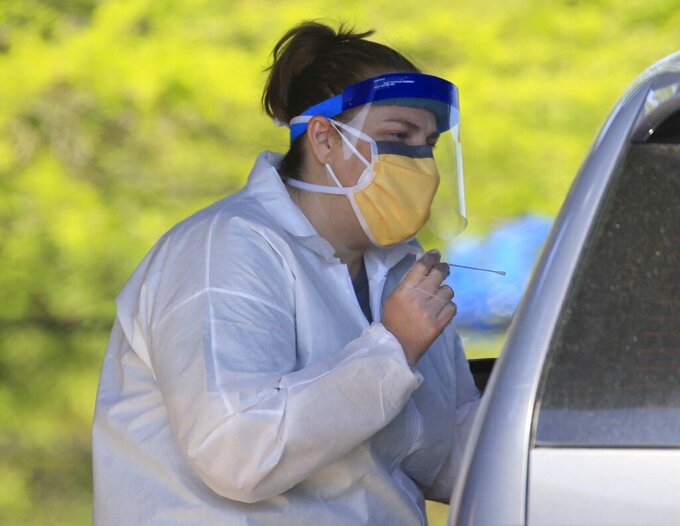 In this Monday, April 20, 2020 photo, Nurse Tonya Green talks with a patient at Arkansas Surgical Hospital's drive-through covid-19 testing site at the New Life Church in North Little Rock. The location is back at the church this week after operations at the hospital last week. (Staton Breidenthal/Arkansas Democrat-Gazette via AP)

LITTLE ROCK, Ark. (AP) — Arkansas will next week ease its ban on elective surgeries during the coronavirus pandemic and an announcement could also come on the lifting of restrictions on other businesses, Gov. Asa Hutchinson said Wednesday.

The state will allow hospitals and clinics to resume some elective surgeries starting Monday, Hutchinson said. The state had ordered health care providers to reschedule procedures that could be safely postponed.

“This will allow them to go back to business, it will allow everybody in Arkansas to have access to more routine procedures that have been put off for the last 45 days," Hutchinson said.

State Health Secretary Dr. Nathaniel Smith said the providers will have to meet certain conditions, including requiring patients to be tested for the virus 48 hours before the procedure. Smith said the the ban is being lifted for procedures that don't require an overnight stay in the hospital.

It was not immediately clear whether the order would clear the way for the resumption of surgical abortions, which the state has halted.

Hutchinson had previously said he hoped to begin lifting some restrictions on May 4 if the state's daily new case tally decreases and its testing capacity expands. He said he'll begin announcing next week whether the state can ease other limits, starting with a decision on restaurants on April 29,where sit-down service is currently prohibited.

The Republican governor said he'll announce May 4 whether to lift limits on places of worship, sporting events and other large venues.

“We want to be able to open Arkansas back to business, but we're also going to take it a step at a time and study the data as we move to those decision points,” he said.

Arkansas is one of a handful of states that hasn't issued a broad stay-at-home order, but Hutchinson has imposed other restrictions and has banned gatherings of more than 10 people.

Health officials said the number of coronavirus cases reported to the state has risen to at least 2,392 people. The state cut its death count from 43 to 42 after officials removed a Missouri resident from its total.

The number of inmates who have tested positive at the Cummins Unit rose from 670 to 681 and the number of staff from 10 to 18. The Health Department, which has tested more than 1,400 inmates at the facility, expects to test 250 more, a spokeswoman said.