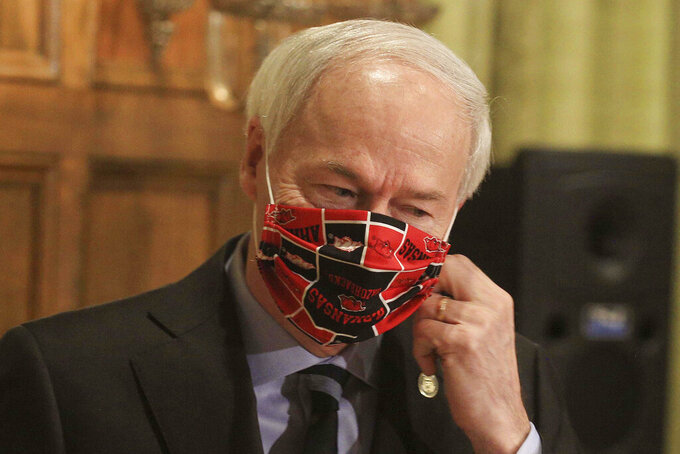 In this Monday, April 27, 2020 photo, Gov. Asa Hutchinson takes off his Arkansas Razorbacks facemark as he arrives for the daily coronavirus briefing at the state Capitol in Little Rock. (Staton Breidenthal/Arkansas Democrat-Gazette via AP) 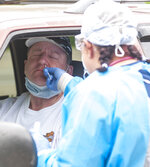 Hutchinson said restaurants, which have only been allowed to sell food via carryout, curbside and delivery since March 20, will be limited to 33% occupancy and will face other social distancing restrictions.

“That's where we need to start at this particular time," Hutchinson said. The Republican governor said the state will later raise the capacity limit to 67%.

Hutchinson also announced a $15 million grant program that would help restaurants and other businesses comply with new coronavirus restrictions by paying for protective equipment, sanitizer and other expenses. By Wednesday night, the state had stopped taking applications for the grants after receiving more requests than funding available.

The announcement is the first in a series of decisions Hutchinson planned this week on whether some businesses that were shuttered because of the virus can reopen. Hutchinson plans to announce Thursday whether he'll lift restrictions on gyms.

Arkansas was one of a handful of states that didn’t issue a broad stay-at-home order, but it had other restrictions in place. Hutchinson has eased other limits in recent days, including a ban on elective surgeries and overnight camping in state parks.

Arkansas health officials said at least 3,207 people have now tested positive for the virus, an increase over the 3,111 reported Tuesday. The number of infections is likely higher because many people have not been tested and studies suggest people can be infected and not feel sick.

The number of deaths in Arkansas from COVID-19, the disease caused by the virus, has risen from 52 to 59.

The restaurant reopening decision received a mixed reception among establishments around the state.

Capi Peck, owner of Trio's Restaurant in Little Rock, called the move premature given the number of active cases. Peck said her restaurant will continue offering delivery and curbside but keep its dining room closed.

“I think it’s socially irresponsible," Peck, who is also a member of the Little Rock city board, said. "It’s still too active and I don’t think most of my customers really are ready to come back."

Clay Waliski, owner of Nick's Bar-B-Q and Catfish in Carlisle, said he was already preparing to reopen his restaurant's dining room under the new rules. The restaurant has been offering takeout since the closure.

“I think customers are ready to come back and to dine in and enjoy something we might have taken for granted a couple of months ago," Waliski said.

The new restrictions for restaurants require daily screening of staff, prohibit groups of more than 10 people and require staff to wear face coverings and gloves. Customers will be required to wear masks until their food or drink is served.

Restaurants will be required to maintain 10 feet of distance between tables so occupied seats are 6 feet away from seats at adjacent tables. Restaurants can serve alcohol but have to keep their bar area closed to customers and can't provide entertainment. Freestanding bars will remain closed.

Hutchinson said the relaxed restrictions won't lift nighttime curfews several cities had imposed because of the virus. Little Rock Mayor Frank Scott said his city's curfew — currently from 9 p.m. to 5 a.m. — would continue in some form but be scaled back.