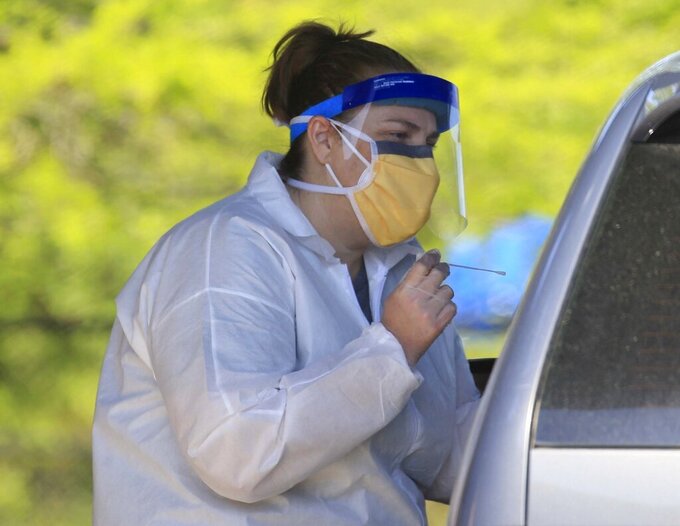 FILE - In this Monday, April 20, 2020, file photo, nurse Tonya Green talks with a patient at Arkansas Surgical Hospital's drive-thru Covid-19 testing site at the New Life Church in North Little Rock, Ark. Arkansas' governor says the state is ramping up coronavirus testing as he nears a decision on whether to allow some businesses to reopen. Gov. Asa Hutchinson said Thursday, April, 23, 2020, the state is launching a "surge" of testing on Friday and Saturday and encouraging anyone in the state with symptoms to get tested. (Staton Breidenthal/The Arkansas Democrat-Gazette via AP, File)

LITTLE ROCK, Ark. (AP) — Arkansas' governor on Thursday said the state will ramp up coronavirus testing over the next two days as he nears a decision on whether to allow some businesses to reopen.

Gov. Asa Hutchinson said the state is launching a “surge" of testing on Friday and Saturday and an ad campaign urging anyone in the state with coronavirus symptoms to get tested. The Republican governor said the state aimed to increase the daily number of tests it performs from about 1,000 to 1,500 during those days.

“If you think you have symptoms, don't wait, get tested," Hutchinson said. The governor said the number of tests conducted in the state has declined since it hit a peak of 1,600 on April 10. He said there's an inventory of testing supplies around the state to handle the surge because of that drop-off.

Health officials said the number of people in the state with confirmed COVID-19 cases had risen to at least 2,465 people deaths had risen from 42 to 45 people. The number of infections is likely higher because many people have not been tested and studies suggest people can be infected and not feel sick.

Hutchinson has said he hopes to lift some of the state's restrictions on May 4 and that he will begin announcing decisions starting next week. He plans to announce Wednesday whether the state will ease restrictions on restaurants, which are currently limited to delivery, curbside or takeout service.

Arkansas is one of a handful of states that doesn't have a broad stay-at-home order.

The two-day surge was announced as Arkansas Democrats raised concerns that the state was moving toward reopening without more widespread testing.

“I am ready for life to get back to normal and I know my neighbors are too. But there’s a risk in telling people to get back to work too early, especially for working families who have children at home," State Democratic Party Chairman Michael John Gray said in a statement.

Hutchinson said the numbers the state sees from the two-day surge in testing will be a factor in whether he decides to lift or ease restrictions.

“We're going to learn a lot from the response," he said.

State Health Secretary Dr. Nathaniel Smith said the number of inmates who tested positive at the Cummins Unit had risen from 681 to 687. He said 35 staff members at the prison had tested positive. A Health Department spokeswoman said the state was awaiting test results for 300 more inmates and 50 staffers.