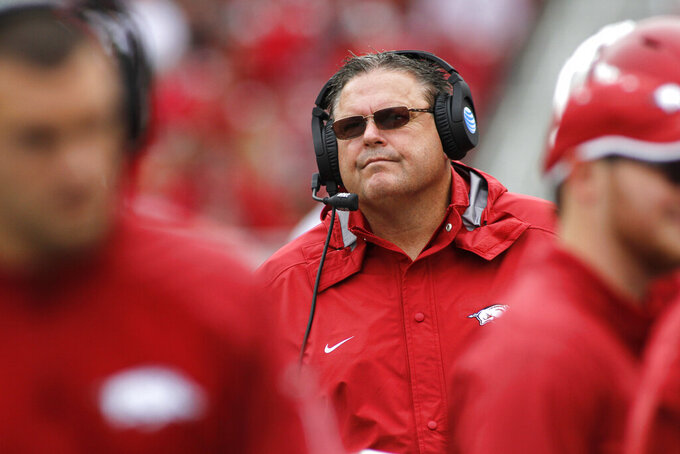 FILE - In this Oct. 24, 2015, file photo, Arkansas' Sam Pittman watches his players run off the field during the second half of an NCAA college football game against Auburn in Fayetteville, Ark. The challenges facing new Arkansas coach Pittman were significant enough without extra wrenches being thrown into his plans. Pittman needed to change the culture following a 2-10 season that saw Chad Morris fired. (AP Photo/Samantha Baker, File)

The challenges facing new Arkansas coach Sam Pittman were significant enough without extra wrenches being thrown into his plans.

Pittman needed to change the culture following a 2-10 season that saw Chad Morris fired. Pittman was eager to get rolling after he was hired, but months later, COVID-19 came along, costing him spring practice and limiting his ability to establish himself with his new team.

“I’d be lying if I said that doesn’t hurt us,” Pittman said back in April. “We know our players as well as we can in the short period of time that we’ve been together, but man, it would have been nice to see what they can do and how they react to coaching and how they react to techniques and things of that nature.”

Once the team was allowed to get back together, a new challenge arose. As a side effect of the pandemic, the schedule changed. Fourth-ranked Georgia and No. 8 Florida got added to the Razorbacks’ schedule when the Southeastern Conference opted for a league-only slate.

“We’re excited to play this schedule,” he said. “The SEC is the best and that’s where Arkansas belongs -- with the best. We’ve got an incredible opportunity ahead of us as a program. Our staff can’t wait to get on the field with our team and prepare to take on the toughest schedule in the country.”

The hope is that Pittman can bring some of his success as Georgia’s offensive line coach to the Razorbacks. The Bulldogs played in the College Football Playoff championship game after the 2017 season. In 2018, Georgia finished first in the SEC in rushing offense and second in scoring offense.

He's made a good impression so far.

“Pittman keeps everybody's energy amped up around here," running back Rakeem Boyd said. “It's a positive vibe. We've been working really hard for the man. He is doing his job, you know what I mean? Whenever he puts stuff ahead of us, we kill it and knock it out.”

Pittman will have quarterback Feleipe Franks, a graduate transfer who played at Florida last season, to run his offense. Franks started 25 games for the Gators and passed for 4,593 yards and 37 touchdowns while rushing for 438 yards and eight scores.

Last season, he started the first three games of the season but missed the rest of the season with a dislocated right ankle. He announced in December that he would explore his options.

Boyd ran for 1,133 yards and eight scores as a junior last season while rushing for more than 100 yards in five games. The Houston native ranked fourth in the SEC with 94.4 yards per game. He’s on the Maxwell and Doak Walker Award watch lists.

Pittman opens the season against his old boss. He served on Georgia coach Kirby Smart’s staff each of the last four seasons after coaching the Razorbacks’ offensive line for three seasons from 2013-15.

It’s been quiet for the Razorbacks since the pandemic started, but the limitation made installing new systems difficult.