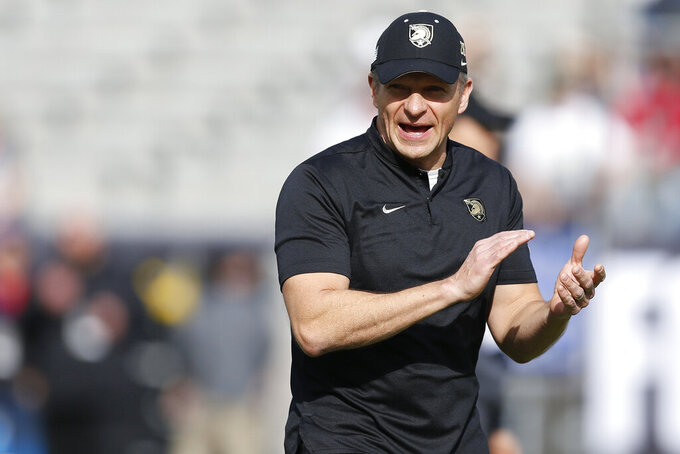 FILE - In this Dec. 22, 2018, file photo, Army head coach Jeff Monken watches as his team warms up before they play Houston in the Armed Forces Bowl NCAA college football game, in Fort Worth, Texas. Monken says his Black Knights are coping with the cancellation of spring ball because of the novel coronavirus. (AP Photo/Jim Cowsert, File)

Army football coach Jeff Monken sees a teaching point in all the disruption caused by the novel coronavirus.

“I think this is great training for Army officers, for our players, for all of our students,” he said on a teleconference Tuesday.

“When our Army officers train themselves and they train their units and soldiers, they don’t often know what the kickoff time is, what the date that kickoff is going to be, who the opponent will be. We have that in sports. We can prepare for that. When our guys join the Army, they’re not going to know," he said.

One thing never changes at West Point no matter what's going on in the world. The password for the teleconference was “beatnavy.” In the midst of the pandemic, that had to suffice for the norm.

“Nothing's normal right now. People call it a new normal. This will never be the normal," Monken said. "Hopefully, that normal is coming back at some point, but right now we're making the best of the situation we're in.”

Monken said the team meets remotely a couple of times a week, mostly to just interact so the staff can check on their emotional, mental and physical well-being as well as well as go over a few Xs and Os.

“They love football and we’re still spending some time with them talking about some football. I think they look forward to that,” Monken said. “We’re meeting regularly as a staff and that maintains that sense of team and camaraderie amongst our coaches and our staff, which is important. As much as possible we're doing the normal things, just not doing them in a very normal way. That’s kind of how we’re managing.”

One of the biggest challenges at the academy isn't physical. A grueling academic schedule is part of the daily routine, and now that's also in a completely different place.

“They're having to experience education at West Point remotely," Monken said. “You think it's challenging to do that here in a classroom? Here you've got access to professors and tutorial help, the group study times that they have. That's really hard to do when you have 4,400 cadets in 4,400 different places."

Monken said the players were spending most of their days attending classes online and working out with whatever training apparatus is available at home — tires, concrete blocks, resistance bands, “even some old buy-off-the-TV-1-800-number-equipment that nobody has ever used.”

“There’s a lot more on their plate right now than there would typically be at West Point, even with football,” he said. "Trying to keep those guys motivated to have a positive attitude and tremendous work ethic is all that we’re concentrating on.”

The Black Knights were getting ready to start spring ball when the NCAA called off all athletic competition in March, cutting short 15 days of practice and meetings.

Monken said the goal is to get everybody “as up to speed as possible from a mental standpoint” so that when the team returns the players have as good of an understanding as possible of their jobs, assignments, and the fundamentals that go along with their positions so the staff can figure out the starting lineup on both sides of the ball as quickly as possible.

“We've lost spring practice. That's a lot of missed time,” he said. “There are some teams who already have completed spring practice, so there will be some inequities when we return. How those are managed I don't know.”