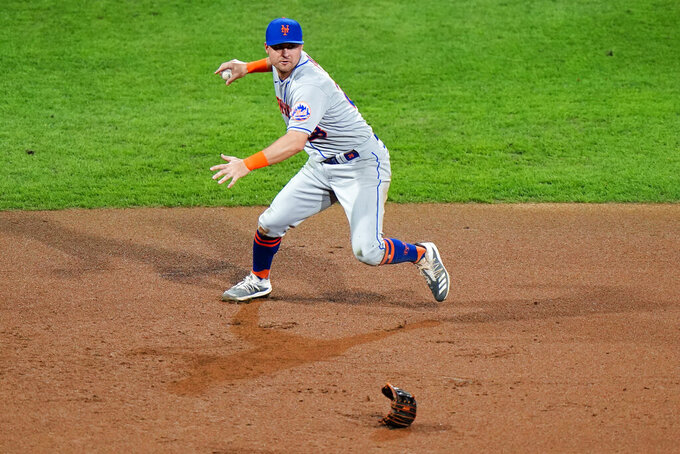 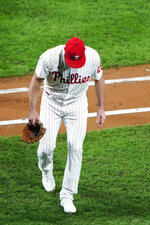 The scuffling Mets played their first game since billionaire hedge fund manager Steve Cohen agreed to buy the team from the Wilpon and Katz families. The agreement was announced Monday and the deal is subject to the approval of Major League Baseball owners.

Arrieta (4-4) allowed one run on Brandon Nimmo’s homer and eight hits in 5 1/3 innings. But he walked off the mound, grabbing the back of his right leg, after hitting Andres Gimenez with a pitch to load the bases. JoJo Romero entered and retired Wilson Ramos on a double-play grounder, with first baseman Alec Bohm making an excellent pick on his backhand.

Romero tossed two innings, Tommy Hunter got two outs and Hector Neris finished for his fourth save in seven chances.

Porcello retired the first two batters in the fourth before he walked Jean Segura. Scott Kingery lined a double to right and Andrew Knapp walked. Pinch-hitter Adam Haseley then lined a single to left-center for a 2-0 lead.

Nimmo answered quickly, driving Arrieta’s first pitch in the fifth out to right to cut it to 2-1.

Gregorius connected in the fifth, launching one off the video board on the facing of the second deck in right. Bohm had reached on an infield single when third baseman J.D. Davis nearly made a sensational play. Davis’ glove and the ball went flying in the air as he tried to short-hop the sharp grounder. Davis looked up, saw the ball coming down, snagged it and fired to first too late to get Bohm.

The Phillies returned home after going 2-5 in a seven-game series at Miami that dropped them to third place in the NL East. They currently hold a wild-card spot.

“Everyone is aware of what took place but right now our focus is on the field,” Mets manager Luis Rojas said about the sale of the team.

Mets: C Tomás Nido remains on the COVID-19 injured list with no timeline for returning to the team.

Phillies: 1B Rhys Hoskins was placed on the 10-day injured list, retroactive to Sept. 13. Hoskins has a left elbow strain. ... OF Roman Quinn was reinstated from the concussion list. ... C J.T. Realmuto remained out of the lineup with a mild strain of the left hip flexor.