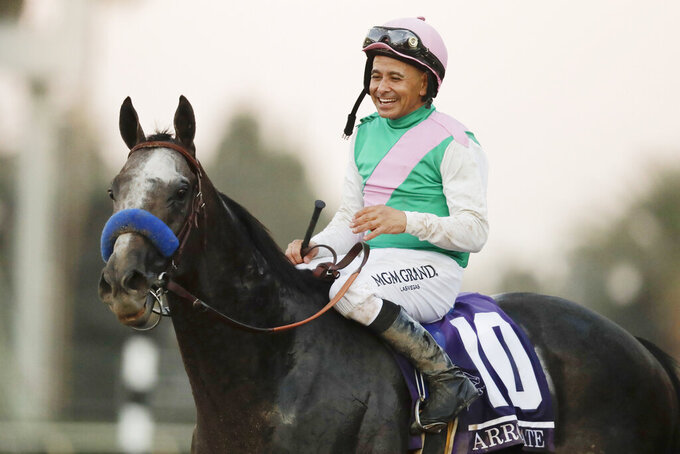 Arrogate, winner of the 2016 Breeders’ Cup Classic and the champion 3-year-old male that year on his way to becoming North America’s all-time leading money earner, has died. He was 7.

Juddmonte Farms said Arrogate was euthanized Tuesday after becoming ill. The Lexington, Kentucky, breeding farm said it was unclear what the illness was and a necropsy is planned.

Juddmonte said Arrogate had been having a successful breeding season until last week when it was suspended because of what was initially suspected to be a sore neck. Days later, he fell in his stall and efforts to get him back up were unsuccessful. He was taken to an animal hospital in Lexington for tests.

“Unfortunately, Arrogate was still unable to stand after four exhausting days for him,” Juddmonte said in a statement. “His will to fight, so valuable to him on the racetrack, became a challenge in his care. When serious secondary health issues set in, the decision was made to put him to sleep.”

Arrogate was bred in Kentucky and purchased for $560,000 by Juddmonte Farms, the racing operation of Prince Khalid bin Abdullah, a member of Saudi Arabia’s royal family. As a yearling, Arrogate's front teeth were knocked back, likely the result of being kicked by another horse. One tooth became infected and removed, which had little impact.

After starting his racing career in California under Baffert, Arrogate traveled east to Saratoga in 2016 and took a major step up in class. He made his stakes debut against Preakness winner Exaggerator and Belmont winner Creator in the Travers.

“He was truly amazing and I'm going to miss him with all my heart,” tweeted Hall of Fame jockey Mike Smith. “The fastest mile and a quarter I've ever gone!”

The gray colt followed with a victory in the Breeders’ Cup Classic, overtaking California Chrome in the final furlongs to win by a half-length. Arrogate earned an Eclipse Award as champion 3-year-old male. To begin his 4-year-old season, Arrogate won the 2017 Pegasus World Cup against two-time Horse of the Year California Chrome in another track record at Gulfstream, followed by a win in the Dubai World Cup against a field that included Gun Runner.

“It takes a lot to make me cry, but I cried this morning when I heard the news,” Baffert said from his base at Santa Anita in California. “I’ve never had a horse that threw in four magical races in a row that were off the charts. He was just brilliant.”

“I would've thrown Arrogate against that horse,” he said. “I would never say that at the time, it's sacrilegious, but believe me, he was that kind of horse.”

After returning to the U.S. from Dubai, however, Arrogate suffered three straight losses and was retired. “He just didn't want to run,” Baffert said.

Despite having only four stakes victories, the large purses for those wins allowed him to become the all-time leading money winner in North America.

Baffert recalled that Arrogate wasn't injured during his racing career.

“He was like iron,” the trainer said. “I couldn't get that horse tired. He was never blowing (after a race), he would just take a deep breath. Even in Dubai, he came back like it was nothing.”

Baffert and his wife, Jill, were unable to make their pre-Kentucky Derby pilgrimage to Lexington to visit Arrogate and Baffert's other top retired stars this year because the race was postponed by the coronavirus pandemic. But Arrogate sired three crops at stud, and Baffert is looking forward to seeing his offspring.

“I really believed in that horse,” he said. “I bred my own mares to him.”

Said Douglas Erskine Crum, CEO of Juddmonte Group, “His physical and personality traits are passing very strongly to his offspring.”