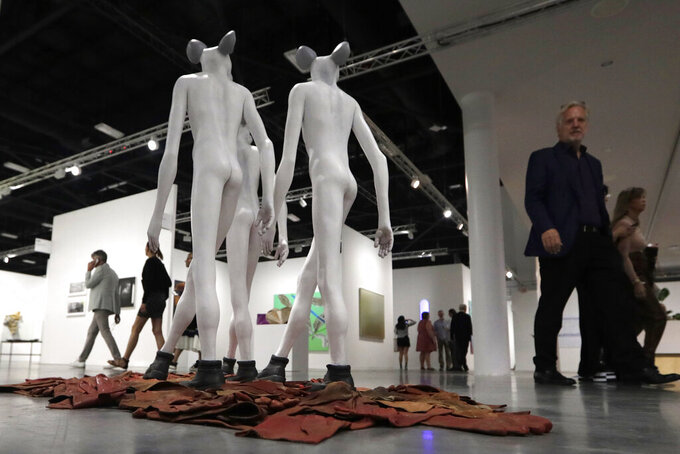 FILE - In this Dec. 4, 2019, file photo, a sculpture by artist Jane Alexander with the Stevenson Gallery is shown during Art Basel Miami Beach, in Miami Beach, Fla. According to a statement released Wednesday, Sept. 2, 2020, the Art Basel fair, known for glamorous parties and celebrity sightings, is cancelling its annual Miami event amid the coronavirus pandemic. (AP Photo/Lynne Sladky, File)

MIAMI (AP) — The high-brow Art Basel fair, known for glamorous parties and celebrity sightings, on Wednesday announced the cancellation of this year's Miami event amid the coronavirus pandemic.

The prestigious December art fair draws collectors, socialites and celebrities from around the world. But the pandemic's impact on international travel restrictions and other quarantine factors left little choice but to postpone the annual event until 2021, according to a statement from the organization.

“We know how crucial our show is for our galleries, as well as for the greater Miami arts community and economy ... and look forward to returning to Miami Beach next year to deliver a successful show,” said Noah Horowitz, director of Americas for Art Basel.

At the same time Wednesday, Gov. Ron DeSantis announced a new $13 million ad campaign to encourage Floridians to vacation in the state.

The video ad encourages people to take advantage of the state’s golf courses, beaches, fishing and other outdoor activities. He made the announcement in Daytona Beach along with Visit Florida CEO and President Dana Young. DeSantis said it's safe to visit theme parks and other Florida destinations.

“I think there’s a lot of pent up demand to kind of do some stuff. I think it’s a rough patch for so many people throughout our country,” DeSantis said.

DeSantis noted that he never ordered the state’s beaches to close during what he called “hysteria in the air” in the early days of the pandemic, and that helped Daytona Beach weather the economic crisis better than other areas.

“People said ‘You have to do that, that’s just so important.’ I did not do that, I was criticized for it, of course, but it was the right decision,” DeSantis said.

“My sense of some of these rigid capacity requirements probably aren’t necessary at this point because I think people understand how to distance, how to do different things,” DeSantis said.

Officials for Art Basel said they are committed to supporting the global art community during such momentous challenges and are launching digital initiatives in addition to the 2021 shows in Hong Kong, Basel, Switzerland and Miami.

In December, the fair plans to unveil “Online Viewing Rooms” that will be open to the galleries accepted to this year's Miami fair.

The number of people being treated in Florida for the disease has been declining since a peak on July 23 when hospitals reported more than 9,500 patients. In the late morning Wednesday, there were 3,532 COVID-19 patients, according to the state’s online hospital census.

While most people who contract the coronavirus recover after suffering only mild to moderate symptoms, it can be deadly for older patients and those with other health problems.