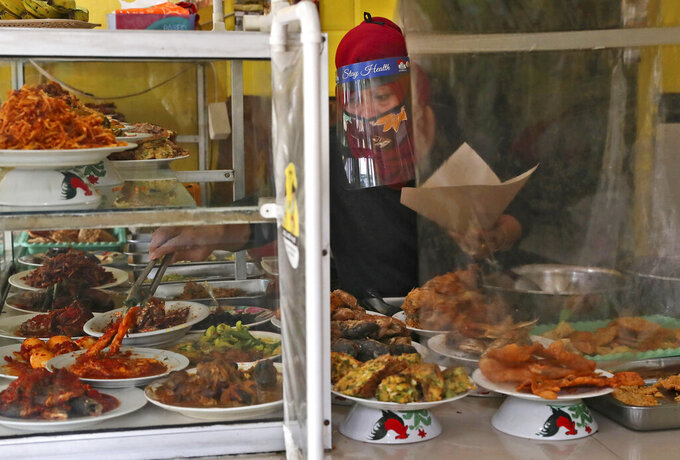 An employee serves customers from behind a plastic sheet installed as a precaution against the new coronavirus at a street food stall in Jakarta, Indonesia, Friday, July 24, 2020. (AP Photo/Tatan Syuflana)

MELBOURNE, Australia (AP) — Australia’s hard-hit Victoria state on Monday posted a new daily record of 532 new COVID-19 cases, and the government leader warned that a lockdown in the city of Melbourne will continue if infected people continue to go to work instead of staying home.

Victoria Premier Daniel Andrews said the biggest source of the new infections is people continuing to go to work after showing symptoms.

“This is what is driving these numbers up and the lockdown will not end until people stop going to work with symptoms and instead go and get tested,” Andrews said.

“There has been significant community transmission in Victoria. That will take some time to get on top of,” Morrison said.

Of the 259 COVID-19 patients in Australian hospitals, 245 were in Victoria.

Australia’s death toll has risen to 161 with six deaths in Victoria, mostly in aged care. There were more than 600 cases of COVID-19 cases among residents and staff at Melbourne aged care homes, Kidd said.

— As India recorded nearly 50,000 new cases of the coronavirus, Prime Minister Narendra Modi prepared to ramp up testing capacity in three major cities. The 49,931 cases reported on Monday brought India’s nationwide tally to beyond 1.4 million. India has the world’s third-highest confirmed caseload after the United States and Brazil. The 32,771 reported deaths from the disease in India, however, represent a far lower fatality rate than in the other two countries, in part because of limited testing. Modi’s office says new high-volume test facilities in Noida, a suburb of New Delhi, and Mumbai and Kolkata, each capable of as many as 10,000 tests per day, will help authorities track the virus. India’s chief medical research agency says the country tested about 515,000 samples for COVID-19 on Sunday.

— Hong Kong will ban dining in at restaurants completely and make it mandatory to wear masks in all public places, as the city battles a worsening coronavirus outbreak that has infected over 1,000 people in the last two weeks. The tightened measures will be effective for at least one week starting Wednesday. They are an extension of a previous ban on eating at restaurants after 6 p.m., as well as a mandatory wearing of masks on public transport. A ban on public gatherings of more than four people has also been tightened, with gatherings limited to two people.

— Vietnam has postponed its hosting of Asia’s largest security forum, which includes North Korea, and an annual meeting of Southeast Asian foreign ministers by a month to September due to the pandemic. Two Southeast Asian diplomats said Monday that Vietnam, which leads the Association of Southeast Asian Nations this year, hopes to hold face-to-face meetings in mid-September instead of over video if the annual gatherings were to be held as originally scheduled later this week. The 10-nation bloc hosts the ASEAN Regional Forum, which brings together its top diplomats with counterparts from the United States, China, Japan, Russia, India, the two Koreas and other Asia Pacific countries to discuss the denuclearization of the Korean Peninsula and other security issues. Most of about 1,300 ASEAN meetings this year have shifted online due to the pandemic.

— About 80,000 people, mostly local tourists, are being evacuated from the popular Vietnamese beach city of Da Nang after four people there were confirmed to have COVID-19 over the weekend, the government said Monday. Vietnam reimposed a social distancing order in Da Nang on Sunday following the confirmation of the cases, the first known to be locally transmitted in the country in over three months. The Civil Aviation Administration said the country’s four airlines have added extra flights and larger planes to transport the people out of the city in central Vietnam. “It will probably take four days to evacuate the 80,000 passengers,” CAA director Dinh Viet Thang said in a statement. Those leaving Da Nang have been advised to self-quarantine and report their health condition to local health agencies, the ministry of health said.

— New Zealand health authorities say they will trace and test people who came into contact with a traveler from the country who tested positive for the coronavirus after arriving in South Korea last week. Health Minister Chris Hipkins says they’ve also asked South Korean authorities to undertake a second test to make sure the passenger has the virus. It has been nearly three months since the last case of community transmission was found in New Zealand and any proof the passenger caught the virus while in New Zealand would come as a big shock to the nation of 5 million people. Health officials in New Zealand say their counterparts in South Korea suspect the traveler was infected while in transit in Singapore. “We have got our contact tracing system kicking into gear though,” Hipkins said.

— China on Monday reported 61 new cases of coronavirus, spread between its northeastern and northwestern regions. The Xinjiang region in the northwest reported 41 new cases, while Liaoning and Jilin provinces in the northeast saw a combined 16. Another four cases were brought by Chinese travelers from outside the country. China has reported 4,634 deaths among 83,891 cases of COVID-19.

— South Korea reported 25 new cases, bringing its national caseload to 14,175 infections and 299 deaths. South Korea’s Centers for Disease Control and Prevention said 16 of the new cases were tied to people arriving from abroad. The country in past days have reported dozens of cases among crew members of a Russia-flagged cargo ship docked in Busan and hundreds of South Korean construction workers airlifted from virus-ravaged Iraq. Eight of the nine local transmissions were from the Seoul metropolitan area.