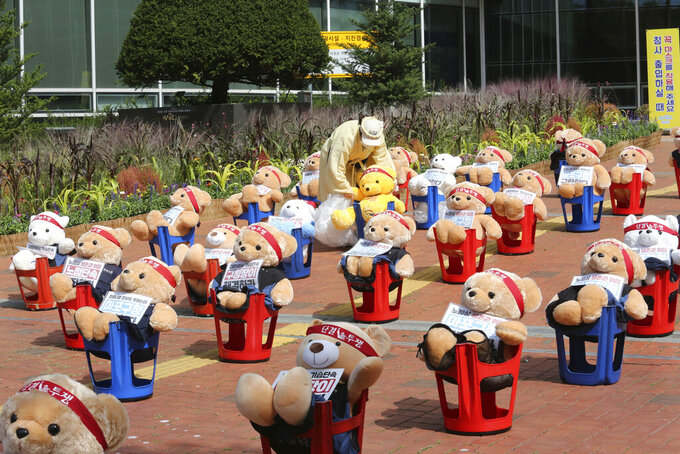 A street vendor places a teddy bear to protest against a crackdown on illegal street vendors, in front of the Mapo ward office in Seoul, South Korea, Thursday, Sept. 24, 2020. Street vendors replaced protestors with teddy bears to avoid the violation of an ongoing ban on rallies with more than 10 people amid the coronavirus pandemic. The signs read: "Stop crackdown." (AP Photo/Ahn Young-joon)

BEIJING (AP) — Foreigners holding certain types of visas and residence permits will be permitted to return to China starting next week as the threat of the coronavirus continues to recede.

The new regulation lifts a monthslong blanket suspension covering most foreigners apart from diplomats and those in special circumstances.

Beginning Monday, foreign nationals holding valid Chinese visas and residence permits for work, personal matters and family reunions will be permitted to enter China without needing to apply for new visas, according to the regulation.

Those whose permits have expired can reapply. Returnees must undergo two weeks of quarantine and follow other anti-epidemic measures, the regulation said.

Some exceptions may still be made, with the foreign ministry communicating to some journalists that the regulation may not apply to them. Journalist visas have recently opened up as a new front in the diplomatic confrontation between Washington and Beijing.

The announcement was made jointly by the Ministry of Foreign Affairs and the National Immigration Administration on Wednesday.

China announced seven new cases of coronavirus on Thursday, all of them imported, marking 39 days since the country has reported a case of domestic transmission. China has confirmed 85,314 cases of COVID-19 since the virus was first detected in the central Chinese city of Wuhan late last year.

— At least 70 employees of a sandwich factory in Tokyo have been infected with the coronavirus, the company said Thursday. After the first case appeared at the Takara-Butz Co. factory on Sept. 9, the company disinfected the plant and took preventive measures under the supervision of local health officials, the company said. Dozens of workers suspected of having had close contact with the patient were told to self-isolate in their homes, but 30 later tested positive. By Thursday, the rest of the plant’s 300 workers were tested and 39 more were found to be infected, the company said. It said the patients are not in serious condition and will return to work after they are confirmed to be free of the virus. Japan has reported 80,041 cases, including 24,453 in Tokyo, and 1,520 deaths as of Thursday, according to the health ministry.

— India reported another 86,508 new coronavirus cases, but Prime Minister Narendra Modi sees little merit in imposing even short local lockdowns. India now has confirmed more than 5.7 million cases, the second-most in the world. The Health Ministry also said Thursday that 1,129 more people have died, for a total of 91,149. India’s junior Railways Minister Suresh Angadi died on Wednesday, nearly two weeks after he was admitted to a New Delhi hospital with COVID-19. He was the first federal minister and the fourth Indian lawmaker to die from the disease. Modi on Wednesday decried short, local lockdowns imposed in some places and said the country needs to not only keep fighting the virus, but also move ahead boldly on the economic front. He asked states to focus on testing, tracing, treatment and surveillance. He said lockdown restrictions hit the smooth movement of goods and services, including medical supplies.

— Auto executives have flown in early to wait out a coronavirus quarantine ahead of the Beijing auto show, the year’s biggest sales event for a global industry that is struggling with tumbling sales and layoffs. Others plan to hold news conferences by video link from their home countries during the show, which begins Saturday. Brands are going ahead with plans to unveil new models in a sign of the importance of China’s market, the world’s biggest. Sales have revived while U.S. and European demand remains weak. Organizers say they will impose intensive anti-disease controls on crowds and monitor visitors and employees for signs of infection.