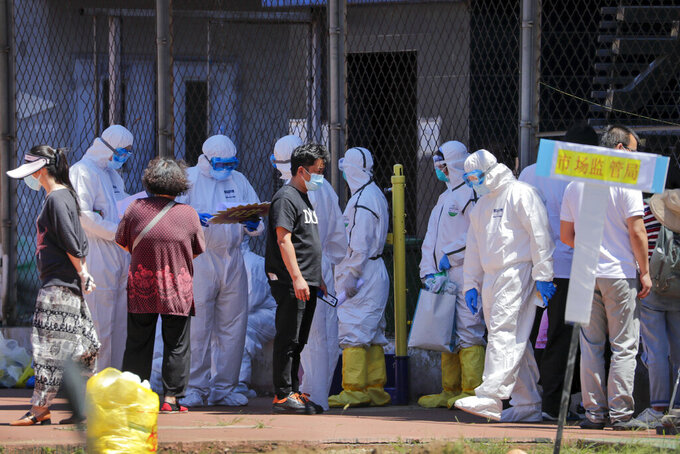 Workers in protective suits check people's names on the list who were either living surrounding the Xinfadi wholesale market or have visited to the market to get a nucleic acid test at a stadium in Beijing, Sunday, June 14, 2020. China is reporting its highest daily total of coronavirus cases in two months after the capital's biggest wholesale food market was shut down following a resurgence in local infections. (AP Photo/Andy Wong)

BEIJING (AP) — China on Sunday reported its biggest one-day jump in coronavirus cases in two months after closing the biggest wholesale food market in Beijing and locking down nearby residential communities.

The Xinfadi market on Beijing’s southeastern side was closed Saturday and neighboring residential compounds locked down after more than 50 people in the capital tested positive for the coronavirus. They were the first confirmed cases in 50 days in the city of 20 million people.

China, where the pandemic began in December, had relaxed most of its anti-virus controls after the ruling Communist Party declared victory over the disease in March.

Authorities locked down 11 residential communities near the Xinfadi market. Police installed white fencing to seal off a road leading to a cluster of apartment buildings.

BANGLADESH SEES OVER 3,000 NEW CASES: Bangladesh reported 3,141 new cases and 32 more deaths from the coronavirus on Sunday, raising its total caseload to 87,520, including 1,171 fatalities. Nasima Sultana, additional director general of the Health Directorate, said a junior minister from Prime Minister Sheikh Hasina’s Cabinet and a former health minister and close aide to Hasina both died of the virus on Saturday in Dhaka, the capital. Bangladesh's main state-run hospitals are overwhelmed, with many critical COVID-19 patients being deprived of intensive care beds and ventilators.