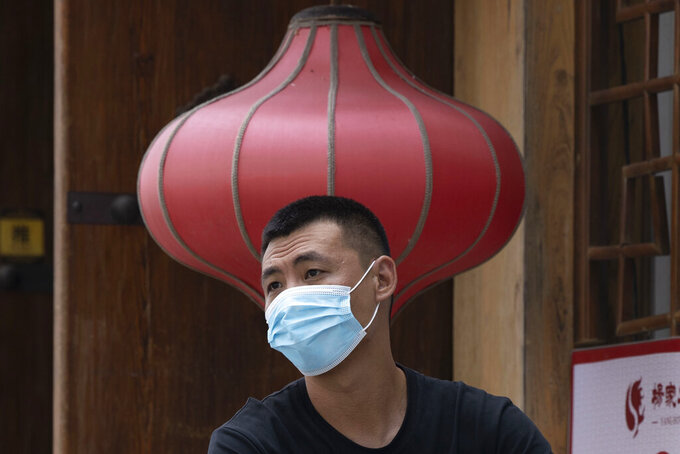 A man wearing a mask to curb the spread of the coronavirus sits near a red lantern outside a restaurant in Beijing Monday, July 13, 2020. China reported eight new cases, all of them brought from outside the country, as domestic community infections fall to near zero. (AP Photo/Ng Han Guan)

The number of confirmed infections neared 900,000 on Monday with a record 28,701 cases reported in the past 24 hours.

The total of 878,254 is behind only the United States and Brazil. The Health Ministry on Monday also reported another 500 deaths in the past 24 hours, taking India's total reported fatalities from COVID-19 up to 23,174.

The ministry said the recovery rate was continuing to improve at 63%.

India imposed a national lockdown March 24 that lasted more than two months, but it has mostly reopened.

— Australia’s worst-hit Victoria state recorded fewer coronavirus cases, but a health official has warned the disease spread might yet worsen. The 177 new cases were substantially down from 273 cases on Sunday and a record 288 on Friday. Victoria’s Chief Health Officer Brett Sutton said it was too early to say whether the lower count meant the spread was being contained. “It’s great it’s lower than our peak. But it may not be our peak yet,” Sutton said. Melbourne and a part of its surrounds in Victoria returned to lockdown last week. Neighboring New South Wales state recorded a rare day in which the COVID-19 cases from community transmission outnumbered cases of infections overseas. Eight of its 14 new cases are linked to a Sydney pub while four were returning travelers diagnosed in quarantine.

— Thirty-two more U.S. Marines were found infected Monday with the coronavirus at a U.S. air station on the Japanese island of Okinawa, where an outbreak among American service members has grown rapidly since last week. Okinawa officials said the cases were confirmed at Marine Corps Air Station Futenma, one of two bases where large clusters have been found, bringing the total to 95. Infections have been also found at three other bases — 22 at Camp Hansen, one at Camp Kinser and another at Camp McTureous. Officials said movements at Futenma and Camp Hansen have been restricted and large-scale tests are being conducted. Gov. Denny Tamaki on Saturday held telephone talks with Lt. Gen. Stacy Clardy, commander of III Marine Expeditionary Force, and demanded the U.S military increase disease prevention measures, stop sending personnel from the mainland U.S. to Okinawa and seal the bases, as well as provide more transparency. Adding to concerns is the quarantining of American service members arriving from the mainland U.S. for staff rotations at an off-base hotel due to a shortage of space on the bases, officials said. Okinawa is home to more than half of about 50,000 American troops based in Japan under a bilateral security pact. Many Okinawans have long complained about pollution, noise and crime related to the bases. Okinawans also oppose a planned relocation of Futenma Air Base from the current site in a densely populated area in the south to a less populated area on the east coast and want the base completely removed instead. Outside the U.S. military bases, Okinawa has reported about 150 cases of the coronavirus.

— Hong Kong on Monday introduced more stringent social distancing measures, banning public gatherings of more than four people and making masks compulsory on public transport as the city battles a renewed outbreak of locally transmitted coronavirus cases. Restaurants will not be allowed to offer dine-in service from 6 p.m. to 5 a.m., and businesses such as fitness centers and beauty parlors will be closed for seven days. The measures take effect Wednesday. The city will also step up testing to identify asymptomatic patients. Hong Kong leader Carrie Lam, who announced the measures, also urged the private sector to put in place work-from-home arrangements for employees. On Monday, 41 out of 52 newly reported cases were locally transmitted, with authorities unable to trace the source for about half of them. Hong Kong has reported a total of 1,522 cases, including seven deaths.

— South Korea reported 62 new cases, most of them tied to international arrivals. At least 43 of the new cases were imported by travelers, although the Korea Centers for Disease Control and Prevention didn’t immediately say where they were from. South Korea on Monday began requiring foreign nationals arriving from Bangladesh, Pakistan, Kazakhstan, and Kyrgyzstan to provide health certificates proving they had tested negative for COVID-19 amid widening outbreaks in Southern and Central Asia. South Korea has been requiring two-week quarantines on all airline passengers arriving from abroad since April.

— China reported eight new cases, all of them brought from outside the country, as domestic community infections fall to near zero. No more deaths were reported and 320 patients remain in treatment, with another 117 people under isolation while being monitored for being suspected of having the virus or having tested positive for it without showing symptoms. China has reported 4,634 deaths from COVID-19 out of 83,602 cases since the virus was first detected in the city of Wuhan late last year.