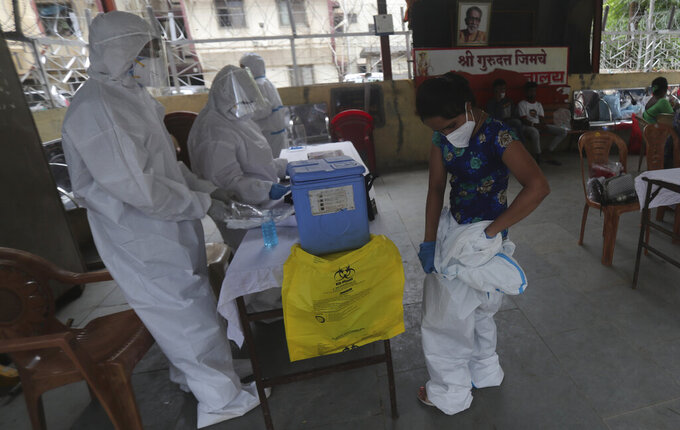 A health worker removes her personal protective equipment after completing screening of residents for COVID-19 symptoms in Dharavi, one of Asia's biggest slums, in Mumbai, India, Friday, June 26, 2020. India is the fourth hardest-hit country by the pandemic in the world after the U.S., Russia and Brazil. (AP Photo/Rafiq Maqbool)

NEW DELHI (AP) — India neared half a million confirmed coronavirus cases Friday with its biggest 24-hour spike of 17,296 new infections, prompting a delay in resumption of regular train services of more than a month.

The actual numbers of infections and deaths from COVID-19, like elsewhere in the world, are thought to be far higher due to a number of reasons including limited testing.

Indian Railways was due to resume regular train service on June 30 but said Thursday that it wouldn't fully resume until Aug. 12. Trains were halted when the government declared a nationwide lockdown in late March. Special trains linking main cities have been running since mid-May as part of an easing of the lockdown.

Domestic flights have resumed on selected routes, but a government decision on restarting international flights is expected next month.

Prime Minister Narendra Modi urged people to strictly observe social distancing and wear face masks, saying such precautions are the only option available until a vaccine is developed.

— Authorities in Thailand are expected next week to extend a coronavirus state of emergency that critics say has been used to silence political dissent. The Center for COVID-19 Situation Administration said it will consider the issue Monday and the Cabinet will decide on its recommendation on Tuesday. The National Security Council declared Thursday it will recommend that the emergency decree be extended at least until July 31. The decree allows the government to implement curfews, censor the media and disperse gatherings. The government has used it to arrest many people for breaking a now-lifted curfew, and recently employed it to arrest political activists for the vaguely defined offense of “instigating unrest.” The COVID-19 center will also recommend whether to allow the gradual return of foreign visitors and the reopening of virtually all businesses and schools not already operating. Thailand announced four new COVID-19 cases on Friday, all brought from outside the country, bringing its total to 3,162, including 58 deaths.

— Australia reported 37 new cases, including 30 in Victoria state, where health authorities are scrambling to contain an outbreak. Authorities said they tested 20,000 people after going door-to-door in Melbourne suburbs Thursday in their attempts to stamp out the virus. In Sydney, a 12-year-old student tested positive, forcing the closure of his school for cleaning. New Zealand, meanwhile, reported one new virus case from a returning traveler. New Zealand has 14 active cases, all of them returning travelers who remain quarantined.

— South Korea reported 39 new cases, mostly from the Seoul metropolitan area where officials have been struggling to stem transmissions. South Korea was considered an anti-virus success story after containing an outbreak during February and March surrounding the southeastern city of Daegu. However, the country has been seeing an uptick in new infections since authorities moved to ease social distancing guidelines and reopen schools starting in May. The update from the Korea Centers for Disease Control and Prevention on Friday brought national totals to 12,602 cases, including 282 deaths. Twelve of the new cases were linked to international arrivals.

— China reported a further decline in new cases Friday, with 13. Eleven were in Beijing, where mass testing has been done following an outbreak that appears to have been largely brought under control. The other two cases were brought by Chinese travelers from overseas, according to the National Health Council. This month’s outbreak in Beijing has seen 260 people infected, leading authorities to lock down some communities and cancel classes. Since then, 3 million test samples have been taken from 2.43 million people.

— Japan's capital confirmed 54 new cases of the coronavirus on Friday, a level which is raising concerns about the possible need for additional cautionary steps. Japan lifted a seven-week state of emergency in late May, and social and business activity has since largely resumed. Tokyo Gov. Yuriko Koike said the daily increase in cases is rather high, but the city's hospitals and medical systems have not been overwhelmed. Most of Friday’s new cases were people in their 20s and 30s, Koike said. She said many recent cases are linked to workplaces and nightclubs. Tokyo has reported 5,997 cases and 325 deaths, about one-third the national total.

— Japan's minister of science and technology, who is tasked with promoting the country's digital transformation, acknowledged Friday that he also headed a group promoting the use of traditional “hanko” seals, which many say have forced employees to continue working in offices during the pandemic because of the need to stamp official documents with them. Naokazu Takemoto said he resigned last month as chairman of the parliamentary group promoting hanko culture to prevent the “misunderstanding” that he was dragging his feet on digitalization to protect the hanko industry. Most adults in Japan have personalized hanko seals with their family name carved in Chinese characters for use on official documents. The government is promoting long-overdue digitalization at work and at schools, but the coronavirus pandemic has revealed that the country, despite its many high-tech companies, still relies heavily on hanko and faxes.

— East Java has surpassed Jakarta as the Indonesian region with the most confirmed coronavirus cases. On Friday, the National Task Force for COVID-19 Mitigation reported 10,901 cases and 796 deaths in East Java. Jakarta reported 10,796 cases and 616 deaths. President Jokowi Widodo visited East Java on Thursday and urged the local government to do more to control the outbreak. The government announced 1,240 new cases throughout Indonesia on Friday, bringing the total to 51,427 with 2,683 deaths.