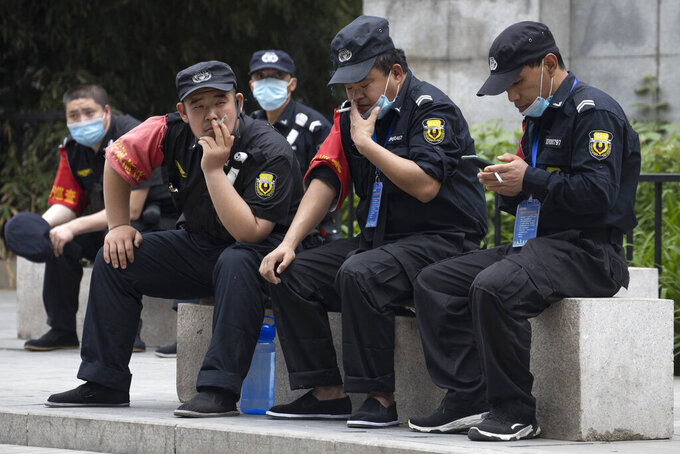 Security guards remove their masks for a smoke break in Beijing on Wednesday, May 6, 2020. China on Wednesday reported just two new cases of the coronavirus and no deaths as it continues to reopen more sectors of the society. (AP Photo/Ng Han Guan)

NEW DELHI (AP) — Health officials are rushing to contain the spread of the coronavirus in India's southern city of Chennai, where an outbreak has been identified at one of the country’s largest markets for fruit, vegetables and flowers.

The busy Koyambedu market, with 500 shops, is central to the food supply chain in Tamil Nadu and neighboring states. It had remained open through India’s nationwide lockdown until it was shut Monday after the cluster was detected.

Some 7,000 people connected to the market are being traced and quarantined, city official J. Radhakrishnan said.

Chennai now has confirmed 2,008 cases, with 545 of them detected in two days. Tamil Nadu has confirmed 4,058 cases and many of its new cases are linked to the market, the state government said.

They credit the strict, six-week lockdown with giving India time to prepare hospitals, equipment and personnel and ramp up testing, but they wonder if it will be enough to avert catastrophe in a country with limited medical care and vast numbers of poor among its 1.3 billion people.

The government eased the lockdown on Monday, allowing some movement and business to resume in areas less affected by the virus while maintaining strict measures in hard-hit areas such as New Delhi and Mumbai.

The surge of people gathering at reopened liquor shops prompted authorities in Mumbai to close them after police had difficulty controlling the crowds. The city, India's financial capital, has been the worst hit by the virus.

— INDONESIAN ELECTIONS DELAYED: The coronavirus has delayed Indonesian regional elections being decided by more than 100 million voters. President Joko Widodo signed a regulation that would move the elections from September to December or later depending on the pandemic situation, the State Secretariat website said. The vote would elect 9 governors, 37 mayors and 224 district chiefs across the archipelago. The General Election Commission already had delayed election preparations because organizers have become ill with COVID-19. The election authority said postponement was the most viable option to prevent the further spread of the virus to rural areas. Indonesia has confirmed 12,071 cases and 872 deaths.

— WUHAN SCHOOLS REOPEN: Senior students returned to classes Wednesday in the central Chinese city of Wuhan, the epicenter of the coronavirus pandemic, after no new cases or deaths were reported from the outbreak that had prompted a 76-day quarantine in the city of 11 million. More than 120 schools re-opened to senior students after the facilities were thoroughly cleaned. Returning students were required to show they were healthy before being allowed inside. Wuhan accounted for the bulk of the more than 82,000 cases China has recorded, along with most of its 4,633 deaths. China’s daily report of new cases has fallen into to the single digits and the country has gone three weeks without announcing any new deaths, prompting authorities to allow a re-opening of classes in Beijing and other areas for senior students preparing to take exams for high school or university. Tourist sites such as the Forbidden City in Beijing have also re-opened with strict limits on the number of visitors, who must show they do not carry the virus.

— AUSTRALIAN CASES SPIKE: Australia recorded 26 new virus cases overnight mainly due to clusters at a Sydney nursing home and a Melbourne abattoir. Deputy Chief medical Officer Paul Kelly said the daily increase was larger than had been usual in recent weeks but he is confident health authorities are quickly getting on top of the clusters. Sixteen deaths are connected to Newmarch House in Sydney. There have been 49 infections linked to Cedar Meats in Melbourne, but no fatalities. The Australian government plans to announce on Friday a relaxation of lockdown rules to get more people back to work. Australia had recorded 6,875 cases and 97 fatalities in a population of 25.5 million.

— LOW SOUTH KOREAN CASES: South Korea reported no new cases in cities and towns Wednesday, with its only two new cases detected in airport screenings. The update brought its totals to 10,806 infections and 255 deaths. With few local cases recently, the country is relaxing social distancing and preparing to reopen schools starting next week. Imported cases have declined as authorities stepped up border controls. Prime Minister Chung Sye-kyun said preventing an overwhelming of hospitals in the densely populated Seoul metropolitan area would be key to prevention of a second wave of infections.

— FOREIGNERS REPATRIATED FROM NEPAL: Hundreds of Australian and New Zealand citizens and permanent residents boarded a chartered flight in Kathmandu bound for Sydney after being stranded for weeks in Nepal. It was only the second flight to Australia since a lockdown was imposed in March to prevent spread of the coronavirus. Australian Ambassador Peter Budd said it was a full flight with 281 people on board including 17 infants. The passengers will spend two weeks in government quarantine after reaching Sydney. Nepal also extended its virus lockdown to May 18 and an airport and border shutdown until May 31.

— SHANGHAI DISNEY PARK REOPENING: The Disneyland theme park in Shanghai will reopen May 11. Visits will be limited initially and must be booked in advance, and the company said it will increase cleaning and require social distancing in lines for the various attractions. With warmer weather and new virus cases and deaths falling to near-zero, China has been reopening tourist sites such as the Great Wall and the Forbidden City palace complex in Beijing. Just two new cases and no deaths were reported Wednesday. China has recorded 4,633 deaths from COVID-19 among 82,883 cases of infection.