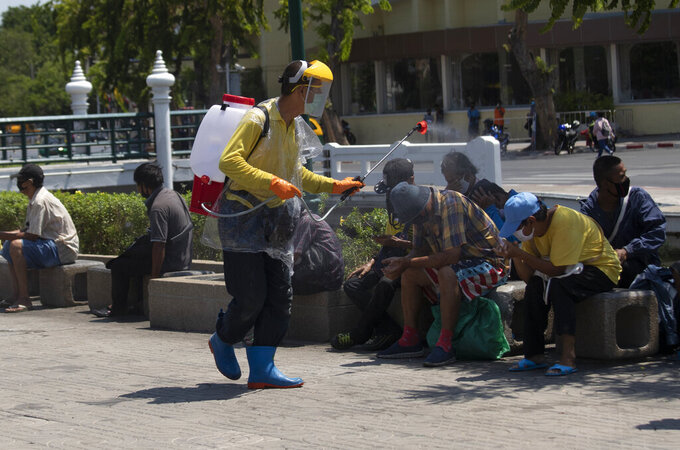 A volunteer sprays disinfectant on people queueing for free food in Bangkok, Thailand, Tuesday, April 21, 2020. A month-long state of emergency remain enforced in Thailand to allow its government to impose stricter measures to control the coronavirus that has infected hundreds of people in the Southeast Asian country. (AP Photo/Sakchai Lalit)

The tiny city-state reported 1,111 new cases on Tuesday, increasing its total to 9,125, the most in Southeast Asia. Foreign workers staying in crowded dormitories account for nearly 80% of the infections.

Lee said the sharp upsurge is due to aggressive testing of workers in the dorms, including those who are asymptomatic.

“Many will be disappointed by the extension of the circuit breaker, especially our businesses and workers, who are hurting greatly,” Lee said in a televised speech. “But I hope you understand that this short-term pain is to stamp out the virus, protect the health and safety of our loved ones, and allow us to revive our economy.”

Praised for its swift response and meticulous tracing of contacts in the early stage of the crisis, Singapore is grappling with an explosion of cases in the dorms that were largely overlooked earlier.

Singapore has nearly 1.4 million migrant workers, a third of its labor force, including more than 300,000 in the construction sector alone.

The health ministry said all types of foreign worker dormitories will be locked down starting Wednesday. It said the government is also monitoring workers who live in shophouses and elsewhere. About 180,000 construction workers and their dependents have been ordered to quarantine themselves at home.

— WHO WARNING: The World Health Organization has warned that the lifting of lockdowns and other measures needs to be done gradually or there will likely be a resurgence of virus cases. The WHO regional director for the Western Pacific, Takeshi Kasai, said “we need to ready ourselves for a new way of living for the foreseeable future.” He said governments must remain vigilant, and the lifting of lockdowns and other social distancing measures must strike the right balance between keeping people healthy and allowing economies to function.

— INDONESIA BANS VISITS: Indonesian President Joko Widodo has banned people in the world’s most populous Muslim-majority nation from returning to their hometowns to celebrate Eid al-Fitr, the end of the dawn-to-sunset fasting during Ramadan. The announcement came amid warnings from health experts that Indonesia could face an explosion of coronavirus cases that could infect more than a million people after Ramadan unless the government takes stricter measures.

— ABE URGES MORE SOCIAL DISTANCING: Japanese Prime Minister Shinzo Abe said people aren't practicing enough social distancing under the state of emergency he declared two weeks ago to fight the coronavirus. He has asked people to reduce social interactions by as much as 80% to slow infections to manageable levels, but surveys show people are moving around too much, especially at train stations and in downtown areas where restaurants and grocery stores are still operating. Abe said Tuesday that hospitals are already overburdened and that infections must be slowed.

— INDIA REPORTS FAULTY TEST KITS: India's government advised states on Tuesday not to use rapid testing kits because of reports they are inaccurate. “Too much variation was being reported in the results of rapid test kits. In next two days, kits will be tested and validated in the field by our teams,” said Dr. R.R. Gangakhedkar of the Indian Council of Medical Research. On Monday, India partially relaxed lockdown restrictions to allow some poor people to go back to work. India’s health ministry says the country has 18,601 confirmed cases and 590 deaths.

— AUSTRALIA SURGERIES TO RESUME: Australia will allow the resumption of non-urgent surgeries next week as health authorities grow more confident that hospitals won’t be overwhelmed by coronavirus patients. State and federal leaders agreed that elective surgeries and medical procedures including in vitro fertilization will restart gradually after being prohibited on March 27.

— HONG KONG EXTENDS CLOSURES: Hong Kong announced a two-week extension of measures to control the coronavirus, including bans on public gatherings of more than four people and the closure of entertainment venues. Businesses such as bars, pubs, beauty salons and karaoke bars will remain closed until at least May 7. Restaurants, which have been allowed to operate, can only to do so at half their capacity with tables spaced approximately 1.5 meters (5 feet) apart. The measures had been due to expire April 23.

— SOUTH KOREA CASES FALL: South Korea reported nine new coronavirus infections and one more death, bringing its totals to 10,683 cases and 237 deaths. The country’s caseload has slowed from early March, when it was reporting about 500 new cases a day. Infections continue to wane in the hardest-hit city of Daegu, which reported two new cases. While calling for vigilance to maintain hard-won gains against the virus, officials have relaxed social distancing guidelines, such as administrative orders advising churches, gyms and bars to close.

— SOUTH KOREAN BASEBALL RESUMES: South Korea’s professional baseball league has decided to begin its new season on May 5, initially without fans, following a postponement over the coronavirus. The Korea Baseball Organization made the announcement Tuesday while teams began their pre-season exhibition games in empty stadiums. The league says fans will be barred from games until the risk of infections is gone.

— CHINA REPORTS NO NEW DEATHS: China reported 11 more cases, including six in the province of Heilongjiang that borders Russia. No new deaths were reported, with the total remaining at 4,632 among 82,758 infections. Despite the dramatic fall in cases, China has maintained strict social distancing rules, including a ban on foreign travelers.

— STRANDED NEPALESE GO HOME: Thousands of villagers who had been stranded in Kathmandu for weeks by a virus lockdown were allowed to board buses to return to their homes east of the capital. The villagers, many out of work, waited in the rain for the buses, which were chartered by several village councils. Under the lockdown, all flights have been halted and ground transport prohibited. Citizens are not allowed to leave home, and markets and schools have been closed. Nepal has 32 confirmed virus cases.