Asia Today: Singapore to reopen some businesses May 12 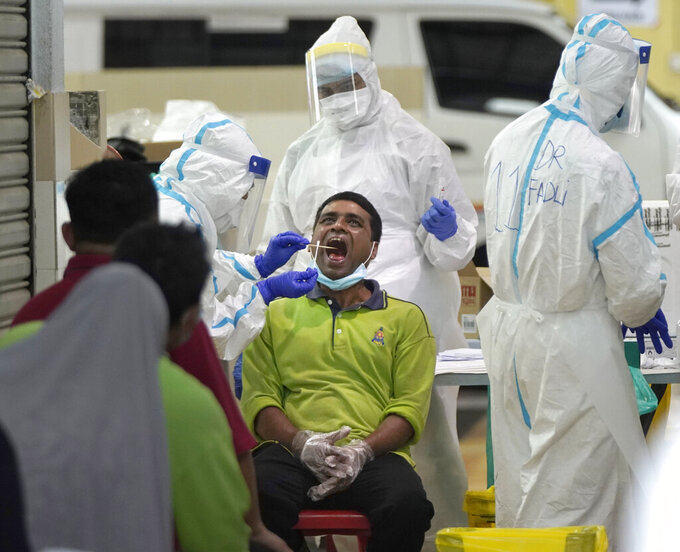 FILE - In this April 28, 2020, file photo, a health worker collects sample for coronavirus testing from a worker at a locked down wet market as one of its traders tested positive for COVID-19 in Petaling Jaya, Malaysia. A Malaysian minister has defended the government's mass arrest of immigrants without valid documents in viral hotspot areas. Senior Minister Ismail Sabri says 586 immigrants were detained during an operation Friday in several buildings under strict lockdown in Kuala Lumpur. (AP Photo/Vincent Thian, File)

BANGKOK (AP) — Singapore will allow selected businesses to reopen on May 12 in a cautious rollback of a two-month partial lockdown despite rising coronavirus infections among foreign workers.

The city-state reported 447 new cases on Saturday to raise its total to 17,548. About 85% of the confirmed infections are linked to foreign workers living in crowded dormitories.

The Health Ministry said the daily infections among Singaporeans have dropped by more than half to 12 in the past week. Cases with unknown sources of infection have also fallen to an average of six a day.

The ministry said restrictions will be eased gradually to avoid a flareup of new infections.

Businesses including food manufacturing, food retail outlets, laundry services, barbers and pet supplies will be permitted to reopen on May 12. Home-based businesses can also reopen. Small groups of students will be allowed back to school on May 19.

A gradual reopening of the economy and work premises will be phased in, with strict health rules including a digital mobile app to speed up contact tracing, the health ministry said. Other lockdown measures remain, including confining more than 300,000 migrant workers in their dorms until the lockdown ends June 1.

— PHILIPPINES TRIES TO DECONGEST JAILS: Nearly 10,000 poor inmates in the Philippines have been temporarily freed by reducing the amounts of their bails to decongest jails amid the pandemic. Associate Justice Mario Victor Leonen said Saturday that most of the more than 9,731 inmates who were freed since mid-March were from jails on the main northern Luzon island, which has been placed under quarantine. Some of the inmates who could not afford to post bail were released to the custody of local officials, the Supreme Court said. The Philippines has some of the most congested jails in the world and at least one detention center in central Cebu city has reported more than 200 infections. The Philippines has reported nearly 9,000 virus cases, including 603 deaths.

— BACK TO WORK IN SRI LANKA: Sri Lanka's government has asked both government and private sector workers to head back to work on May 11, even though some parts of the country will still be under a 24-hour curfew. The government said in a statement that organizations should strictly adhere to health guidelines issued by the government. The island nation had been under a 24-hour curfew since March 20. The curfew was lifted during daytime hours in more than two thirds of the country on Tuesday and Wednesday, but was reimposed on Thursday, leaving a 24-hour curfew in effect until Monday. But the 24-hour curfew will still be in effect in four districts even after May 11. Sri Lanka has confirmed 690 coronavirus cases, including seven deaths.

— MALAYSIA MINISTER DEFENDS ARRESTS OF IMMIGRANTS: A Malaysian government minister has defended the government’s mass arrests of immigrants without valid documents in coronavirus hot spots. Senior Minister Ismail Sabri said 586 immigrants were detained Friday in several buildings under lockdown in Kuala Lumpur. He said they all tested negative for the virus and were sent to detention camps for breaching immigration laws. Rights groups have slammed the government for breaking its promise not to take action against migrants who come out for virus screening. Ismail brushed off the criticism Saturday, saying authorities were acting within the law. Malaysia has confirmed 6,176 virus cases, including and 103 deaths.

— 6 NEW CASES IN SOUTH KOREA: South Korea on Saturday reported six new cases of the coronavirus, continuing a monthlong streak of daily increases of less than 100, as infections continue to wane in the hardest-hit city of Daegu. South Korea has confirmed 10,780 confirmed cases, including 250 deaths. At least 1,081 cases have been linked to international arrivals, but those have also declined in recent weeks as the government strengthens border controls, such as enforcing 14-day quarantines on all overseas passengers.

— CHINA REPORTS 1 INFECTION: China, where the pandemic began in December, reported one new infection and no deaths in the 24 hours through midnight Friday. The country has reported a total of 82,875 confirmed cases and 4,633 deaths. The National Health Commission reported 43 people were released from hospitals Friday after being declared recovered, raising the total to 77,685. There were a total 557 people still hospitalized on the mainland.