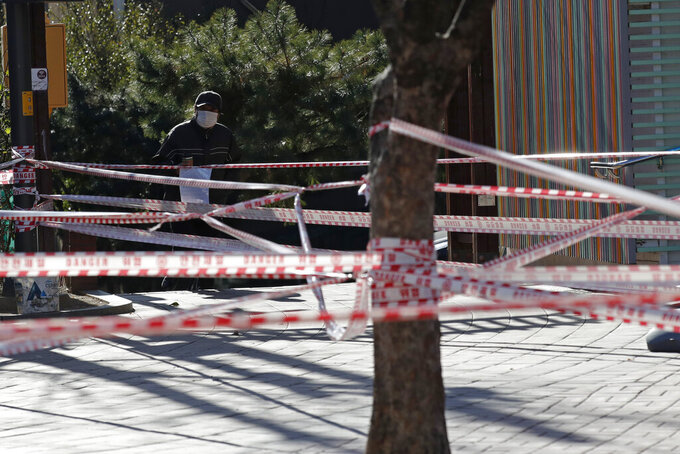 A man wearing a face mask looks at a park, which is taped off for the social distancing measures and a precaution against the coronavirus in Seoul, South Korea, Wednesday, Dec. 16, 2020. (AP Photo/Lee Jin-man)

The 1,078 cases confirmed by the Korea Disease Control and Prevention Agency on Wednesday brought the national caseload to 45,442. The death toll was 612 after 25 COVID-19 patients died in the past 48 hours, the two deadliest days since the outbreak began.

The agency said 226 among 11,883 active patients were in serious or critical condition, which was also the most since the start of the pandemic, as fears grow about a possible shortage in hospital capacities.

Senior Health Ministry official Yoon Taeho said authorities were discussing whether to elevate social distancing restrictions to the highest "Tier 3,” which could possibly including banning gatherings of more than 10 people, shutting non-essential businesses, and requiring companies to have more employees work from home.

“Tier-3 social distancing is the last and strongest measure that we could take, which would cause widespread damage to the self-employed,” he said. “We are hearing the opinions of experts, including those from central government agencies and regional governments ... while deeply reviewing whether to elevate the measures.”

More than 770 of the new infections were reported from the Seoul metropolitan area, home to half of the country’s 51 million people, where new clusters are popping up from just about everywhere, including churches, hospitals, long-term care facilities, schools, restaurants, army units and prisons.

Infections were also reported in other major cities, including Busan, Daejeon, Ulsan and Daegu.

Critics say the country let its guard down by easing social distancing to the lowest in October out of concerns about sluggish economic growth rates despite warnings of a viral surge during the winter, when people spend longer hours indoors.

The government restored some restrictions over the past weeks, such as shutting down nightclubs, halting in-person school classes and requiring restaurants to provide only deliveries and takeouts after 9 p.m.

— Tokyo has reported 678 new cases of the coronavirus, a high for the Japanese capital, as Japan now struggles with another surge in the virus. The Tokyo Metropolitan Government said Wednesday that the new cases bring the prefectural total to 48,668. Infections have been on the rise nationwide. Japan had more than 2,410 cases Tuesday for a national total of 184,042, including 2,688 deaths. Prime Minister Yoshihide Suga, apparently reluctant to further damage businesses already hit by the pandemic, has been slow to take steps. Last Friday, after repeated calls from experts, Suga finally announced plans to suspend the government’s travel promotion campaign nationwide from Dec. 28 to Jan. 11 following a series of media surveys showing a sharp decline in his approval ratings.

— Indonesia, the world’s fourth most populous nation, says it will offer free COVID-19 vaccines to its people. President Joko Widodo said Wednesday he has ordered the finance minister to reallocate spending from other matters to fund the free program. A shipment of 1.2 million doses of a COVID-19 vaccine developed by China-based biopharmaceutical company Sinovac Biotech arrived in Jakarta on Dec. 6. Another 1.8 million doses of the vaccine are expected to arrive in early January. The government is still waiting for millions of other doses of the Sinovac vaccine to arrive in the form of raw materials that will further processed by state-owned pharmaceutical holding company PT Bio Farma. State-Owned Enterprise Minister Erick Thohir said Indonesia aims to vaccinate 107 million people between the ages of 18 and 59 by the end of next year, despite most other countries starting their vaccination programs with older people. Thohir said those in the 18-59 age group are the most active and therefore are more exposed to the coronavirus. Health Minister Terawan Agus Putranto has said the government will wait to vaccinate older people until research and clinical trials show that a vaccine is safe for them.

— Sri Lankan authorities have reopened the island’s main fish market, which had been closed for two months. The Central Fish Market, located on the outskirts of the capital, Colombo, was closed in October after 49 traders there tested positive for the coronavirus. Fish sales dropped sharply after the outbreak at the market spread across the island nation. The number of cases centered at the fish market has risen to 26,774. While the fish market resumed operations on Wednesday, authorities said it would be limited to wholesale trade. Sri Lanka has seen a fresh outbreak of the virus since October when two clusters — one centered at a garment factory and the other at the fish market — emerged in Colombo and its suburbs. Another cluster surfaced at crowded prisons last month. So far, there have been 30,459 confirmed cases from the three clusters. Sri Lanka has reported a total of 34,104 cases, including 154 deaths.