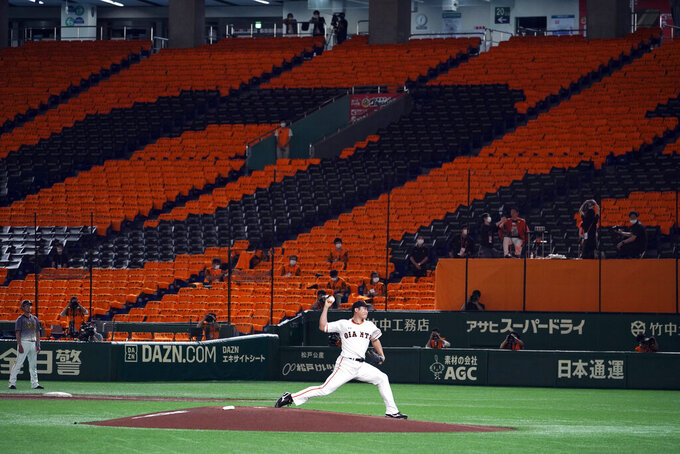 Yomiuri Giants starter Tomoyuki Sugano pitches with a backdrop of empty stands during play in an opening game against the Hanshin Tigers at Tokyo Dome, Friday, June 19, 2020, in Tokyo. After a three-month delay caused by the coronavirus pandemic, the world’s second-most famous baseball league opened a shortened season Friday without the presence of fans. (AP Photo/Eugene Hoshiko)

SEOUL, South Korea (AP) — South Korea has reported 49 cases of COVID-19 as the virus continues to spread in the densely populated capital area where half of the country’s 51 million people live.

Figures released by the Korea Centers for Disease Control and Prevention on Friday brought the national caseload to 12,306 infections, including 280 deaths. It said 26 of the new cases came from capital Seoul and the nearby port city of Incheon. Seventeen of the new cases were linked to international arrivals.

South Korea has been reporting around 30 to 50 new cases per day since late May, inspiring second-guessing on whether officials were too quick to ease social distancing guidelines in April after the country’s first wave of infections waned.

Health authorities have been scrambling to stem transmissions in the greater capital area where hundreds of cases have been linked to leisure and religious activities, e-commerce employees and door-to-door salespeople.

— India has recorded its highest one-day spike of 13,586 coronavirus cases, raising the total cases to 380,532, with no signs of flattening of the curve. India’s total deaths reached 12,573, a rise of 336, according to a Health Ministry statement on Friday. Three states, Maharashtra, Tamil Nadu and New Delhi, account for 60% of total cases. The nationwide lockdown imposed in March has been lifted except for high-risk areas. The government has allowed reopening of shops, malls, manufacturing and religious places. However, schools, colleges and movie halls remain shuttered across the country.

— Singaporeans can wine-and-dine at restaurants, workout at the gym and hold social gatherings of not more than five people with the removal of most lockdown restrictions. The tiny city-state has one of the highest infections in Asia with 41,473 cases, mostly linked to foreign workers’ dorms. The government says infections in the dorms have declined, with no new large clusters emerging. Cases outside the dorms were also stable despite a partial economic reopening two weeks ago. Malls, gyms, parks and other public facilities reopened their doors Friday, with strict social distancing and healthy safety rules. Contact sports, trade fairs, mass religious congregations are among group events that remain banned, and entertainment venues such as bars are still shut.

— New confirmed cases of coronavirus remained stable in China’s capital on Friday after a public health official declared Beijing’s latest outbreak under control. Beijing recorded 25 new cases, up by just four from Thursday, out of a total of 32 cases reported nationwide. A city transport spokesman said bus service between Beijing and other provinces would be suspended starting Friday to try to prevent the outbreak’s spread. Classes in the city have also been suspended and reopening plans for sports and other events are on hold. More than 360,000 tests for the virus have been carried out in recent days, according to city health authorities.

— Japan and Vietnam have agreed to partially lift travel bans and ease restrictions step by step as a way to reopen economic and bilateral exchanges between the two Asian nations where coronavirus infections have largely been taken under control. Japanese Foreign Minister Toshimitsu Motegi told reporters Friday that Vietnam is one of four countries that Japan has been discussing resuming mutual visits in phases. Japan is also seeking similar bilateral arrangements with Thailand, Australia and New Zealand. Japan and Vietnam are discussing final details such as timing of resumption, Motegi said.

— A livestock ship loaded with 35,000 sheep has left Australia for the Middle East three weeks behind schedule due to half the crew becoming infected with coronavirus. The Al Kuwait had arrived in Fremantle from the United Arab Emirates in May and soon afterward, 20 of its 48 crew members tested positive for the virus. All have recovered and most left with the ship that is bound for Kuwait. The ship was granted an exemption to export sheep during the Northern Hemisphere summer, but the cargo allowance was lowered from the original 56,000 animals.

— China says it has published the gene sequences for three strains of the coronavirus detected in the new outbreak that hit Beijing this month. The Center for Disease Control said it has provided the sequences to the World Health Organization and the GISAID Initiative that helps disseminate such information around the world. At least one of the strains tied to the Chinese capital’s largest wholesale food market had reportedly shown similarities to a strain found in Europe. Also Friday, spokesperson for the National Health Commission Hu Qiangqiang said local confirmed infections had been recorded for five consecutive days in two areas, apparently referencing Beijing and the neighboring province of Hebei.

— Japan has launched a smartphone app that notifies users who have come into close contact with someone infected with the coronavirus. The COVID-19 Contact Confirming Application, or COCOA, was created by the Health Ministry using technology developed by Apple and Google. The free app logs users’ data via phone Bluetooth when they are within a meter (yard) of each other for 15 minutes of longer. If any of them test positive and disclose their results in the app, other users are notified of an anonymous person’s infection.