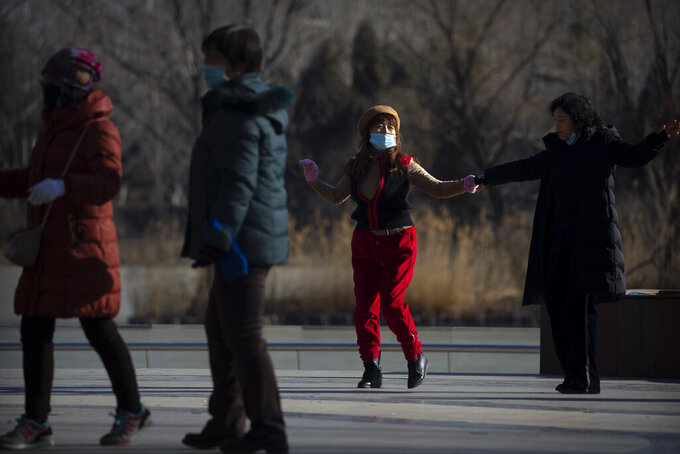 People wearing face masks to curb the spread of the coronavirus dance at a public park in Beijing, Tuesday, Jan. 5, 2021. China has designated parts of Hebei province near Beijing as a coronavirus high danger zone after 14 new cases of COVID-19 were found. (AP Photo/Mark Schiefelbein)

BANGKOK (AP) — Thailand reported 527 new coronavirus cases, most of them migrant workers who already were isolated, and the government said it was tightening movements of people around the country.

Thailand has been struggling with a sudden virus surge after months of hardly any cases of domestic transmission. Field hospitals were being set up in parts of five provinces with many cases.

Large parts of the country, including the capital Bangkok, are under various lockdown restrictions, and the government said it will additionally restrict travel between virus-hit provinces to goods, cargo and necessary travel, and set up checkpoints on some roads.

Of the new cases confirmed Tuesday, 439 were migrants, 82 were local transmissions and six were in quarantined travelers, the Center of COVID-19 Situation Administration said. The total was a drop from the 745 registered Monday, the all-time high in Thailand, where the first case of the virus outside China was detected last January.

Most of the surge since last month has been in Samut Sakhon province, next to Bangkok, among migrant workers living in dormitories and employed in fish markets and factories. A field hospital next to the market is treating the infected migrants.

Although it has canceled public activities and gatherings and shut schools, bars and other places where people gather, the government has not yet taken measures as strict as those that it imposed in March — when it successfully stamped out local transmission.

Malls and department stores remain open with social distancing required, and indoor dining at restaurants is allowed until 9 p.m.

“We don’t want to lock down the entire country because we know what the problems are, so can you all lock down yourselves?” he said. “This is up to everyone, if you don’t want to get infected just stay home for 14 to 15 days."

The government also has been scrambling to acquire more vaccines after an initial period of complacency.

Prayuth said Monday that Thailand is seeking to secure 63 million doses, which wouldn't cover half of its population of about 70 million. It so far has about 28 million doses on order for later in the year.

— Sri Lankan authorities say they will fully reopen the country's two international airports and allow the return of tourists who undergo coronavirus tests starting Jan. 21. Foreign tourists were banned in March when the first wave of COVID-19 surfaced. Under a pilot project last month, hundreds of tourists were allowed from Ukraine in a “travel bubble." In the new program, tourists must be tested in their country 72 hours prior to their flight, when they arrive at their hotel and again seven days later. Tourism Minister Prasanna Ranatunga said Tuesday the decision to reopen airports and tourism was made because of the plight of people who depend on the tourism industry. Tourism accounts for about 5% of Sri Lanka's GDP and employs 250,000 people directly and up to 2 million indirectly. Sri Lanka has reported 45,498 COVID-19 cases, including 215 deaths.

— Qantas Airways has begun selling seats on international flights from July 1 despite the Australian government's ban on most residents leaving the country. Australia’s flagship airline said on Tuesday it is selling tickets on the expectation that international travel “will begin to restart from July.” “We continue to review and update our international schedule in response to the developing COVID-19 situation,” it said in a statement. Since March, Australia has prevented most citizens and residents from leaving so they won’t bring the coronavirus back to the island nation. Travelers from New Zealand are the only ones spared 14 days of hotel quarantine on arrival in Australia in recognition of the near neighbor’s success in controlling the virus. Australian Transport Minister Michael McCormack said borders will be reopened when international arrivals do not pose a risk to Australians. “Decisions about when international travel resumes will be made by the Australian government,” McCormack said in a statement.

— China has designated parts of Hebei province near Beijing as a coronavirus high danger zone after 14 new cases of COVID-19 were found. Eleven of those cases were in Shijiazhuang city. Parts of the city will undergo stricter testing and isolation measures, and areas of another Hebei city with new cases were registered as medium risk areas. Medical investigators were looking into whether a single event such as a family gathering had been the origin of many of the cases. Wary of another wave of infections, China is urging migrant workers to stay put during the Lunar New Year holiday. Classes are being dismissed early and tourists are being told not to come to Beijing for holidays.

— Indonesia will begin COVID-19 vaccinations on Jan. 13, with President Joko Widodo the first recipient. Minister of Health Budi Gunadi Sadikin said Tuesday that other government ministers will receive the vaccine after the president. A broader program will begin the following day that will prioritize 1.3 million health workers and 17.4 million public officers. The vaccine from China's Sinovac Biotech must still receive emergency use authorization from the Food and Drug Supervisory Agency and halal approval from the Indonesian Ulema Council. The Health Ministry says it will take 15 months to vaccinate its total population of 181.5 million people. On Tuesday, the country reported 7,445 new COVID-19 cases, bringing the confirmed total to 779,548, including 23,109 deaths.

— India has reported 20 more cases of a new fast-spreading variant of the coronavirus originally found in Britain, taking its total to 58. Health officials haven’t said whether the infections were found in people who returned from the U.K., or were spread locally. Overall confirmed cases of the coronavirus, however, remain on a downturn trajectory since hitting a mid-September peak. India has reported more than 10.3 million cases and over 150,000 deaths. It soon plans a massive vaccination program targeting about 300 million people by August. The government has granted emergency-use approval for two vaccines, one developed by Oxford University and U.K.-based drug maker AstraZeneca, and another by Indian company Bharat Biotech and a government institute. The Indian vaccine was hailed by Prime Minister Narendra Modi as a success in India’s self-reliance push but ran into controversy because the country’s regulator has not published information about its efficacy. The watchdog All India Drug Action Network said it was “baffled to understand the scientific logic” in approving “an incompletely studied vaccine.”