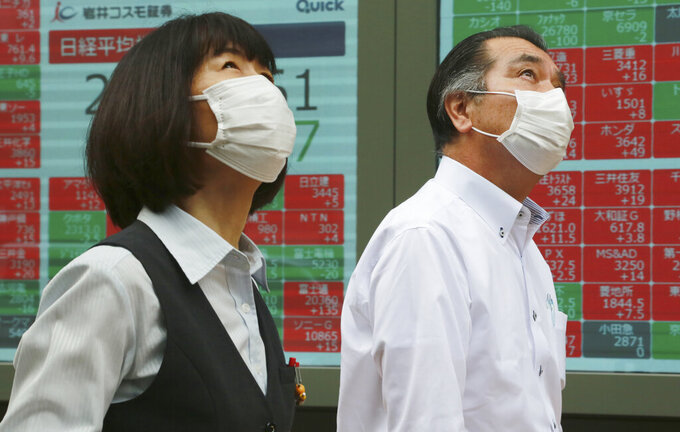 People walk by an electronic stock board of a securities firm in Tokyo, Monday, June 28, 2021. Asian stock markets declined Monday after Wall Street hit a new high as investors looked ahead to manufacturing indicators from Japan, China and South Korea.(AP Photo/Koji Sasahara)

Shanghai, Tokyo and Seoul declined. Trading in Hong Kong was suspended due to a weather alert.

Investors have been encouraged by progress in Washington on an infrastructure spending plan. Markets have recovered from the Federal Reserve’s announcement that it might start raising interest rates sooner than expected.

The S&P’s gain “is generally telling of improving sentiment,” said Mizuho Bank in a report.

In energy markets, benchmark U.S. crude lost 14 cents to $73.91 per barrel in electronic trading on the New York Mercantile Exchange. The contract rose 75 cents to $74.05 a barrel Friday. Brent crude, the basis for international oil prices, shed 23 cents to $75.15 per barrel in London. It gained 62 cents the previous session to $76.18.