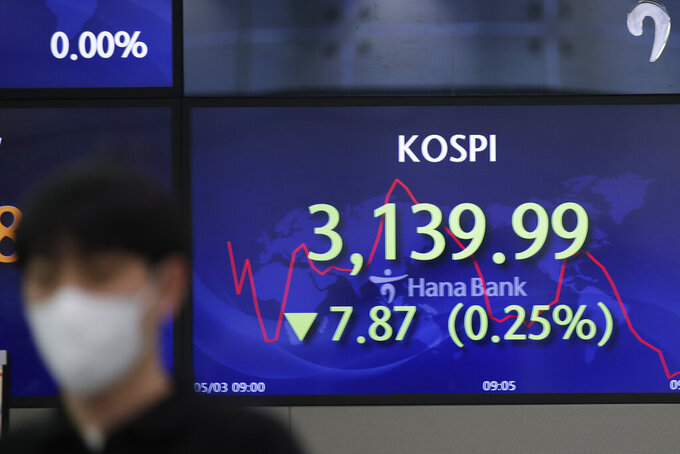 A currency trader walks by a screen showing the Korea Composite Stock Price Index (KOSPI) at a bank's foreign exchange dealing room in Seoul, South Korea, Monday, May 3, 2021. Shares were mostly lower in Asia in thin trading Monday, with many markets including those in Tokyo and Shanghai closed for holidays. (AP Photo/Lee Jin-man)

Shares were mostly lower in Asia in thin trading Monday, with many markets including those in Tokyo and Shanghai closed for holidays.

The declines follow a retreat Friday on Wall Street, where the S&P 500 gave up 0.7% but still closed out its best month so far this year.

Markets have mostly climbed in recent weeks as investors remain optimistic that the pandemic is slowly and steadily coming to a close, at least in the United States. The S&P 500 rose 5.2% in April, its best monthly gain since November 2020, when President Joe Biden was elected.

In much of Asia and many other countries, caseloads have surged and vaccination levels remain low.

U.S. futures were higher, with the contracts for both the Dow industrials and the S&P 500 up 0.3%.

With many markets closed there was little in the way of news to drive trading.

Investors backed away from technology, financial and communication stocks. Despite the decline, the S&P 500 ended April with a 5.2% gain, its best month since November 2020, when President Joe Biden was elected. It logged a gain of about 28% between November and April.

Trillions of dollars in government support are helping the U.S. economy recover from the pandemic. The Commerce Department said U.S. household incomes surged 21% last month, driven largely by the $1,400 payments that went out to most Americans as part of President Biden’s economic package. Consumer spending rose at the fastest pace in nine months.

The Biden administration is also pushing for more infrastructure spending to help further boost the economy, though that raises concerns over how that might affect taxes and inflation. To pay for his plans, Biden has proposed to nearly double the tax rate that Americans who make more than $1 million in a year pay on profits from stocks and other investments. The president also wants to impose a 21% minimum tax on corporations’ foreign earnings in a bid to stop companies from stashing profits in countries with low tax rates.

Corporate earnings have helped drive recent gains. More than half of the companies in the S&P 500 have reported their results, which show earnings growth of 54% percent so far for index, according to FactSet.

Investors will get another big dose of earnings reports to start off May, including results from drugmakers Eli Lilly, Merck as well as Pepsi, Colgate-Palmolive, the railroad CSX and drugstore giant CVS. Investors will also get April’s jobs report this week.