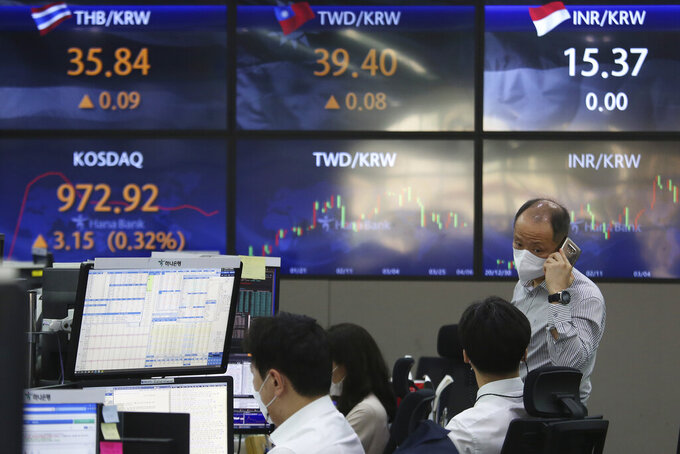 A currency trader wearing a face mask talks with his colleague at the foreign exchange dealing room of the KEB Hana Bank headquarters in Seoul, South Korea, Tuesday, April 6, 2021. Asian shares were mixed Tuesday after a Wall Street rally that reflected some optimism about the economy recovering from the damage of the coronavirus pandemic. (AP Photo/Ahn Young-joon)

TOKYO (AP) — Asian shares were mixed Tuesday after a Wall Street rally that reflected some optimism about the economy recovering from the pandemic.

Yoshimasa Maruyama, chief market economist at SMBC Nikko, noted a gradual recovery in the Japanese economy had been reflected in the recent “tankan” Bank of Japan survey, which was released last week. He said a rebound was marked in electronics because of households consuming electronics goods, as the pandemic had squelched people's spending on services.

Deep worries remain over the pandemic, with medical experts warning Japan to brace for a “fourth wave” of surging infections and deaths related to COVID-19, as the nation has fallen behind the rest of the world in testing and vaccinations.

Similar outbreaks have flared in other countries, including India and Thailand.

The gains came after the U.S. government reported that employers went on a hiring spree in March, adding 916,000 jobs, the most since August.

Traders had a delayed reaction to the encouraging jobs report, which was released on Friday when stock trading was closed. Investors were further encouraged by a report Monday showing that the services sector recorded record growth in March as orders, hiring and prices surged.

Both employment and the services industry have been lagging other areas of the economy throughout the recovery. Analysts have said that both need to show signs of growth in order for the recovery to remain on track. In the U.S., the strong rollout of vaccinations is making an eventual return to normal for many people seem clearer and closer.

“The jobs report underscored the rebound in the labor market,” said Quincy Krosby, chief market strategist at Prudential Financial. “The only thing that can stymie this rebound, this recovery, will be that COVID-19 launches another wave.”

The gains were broad Monday, with nearly every sector rising. Companies that stand to benefit from a broader reopening of the economy and economic growth also did well. Norwegian Cruise Line jumped 7.2% for the biggest gain in the S&P 500 as it seeks permission to restart cruises out of U.S. ports in July with a vaccination requirement for passengers and crew members. Rival Carnival rose 4.8% and Royal Caribbean gained 3.5%.