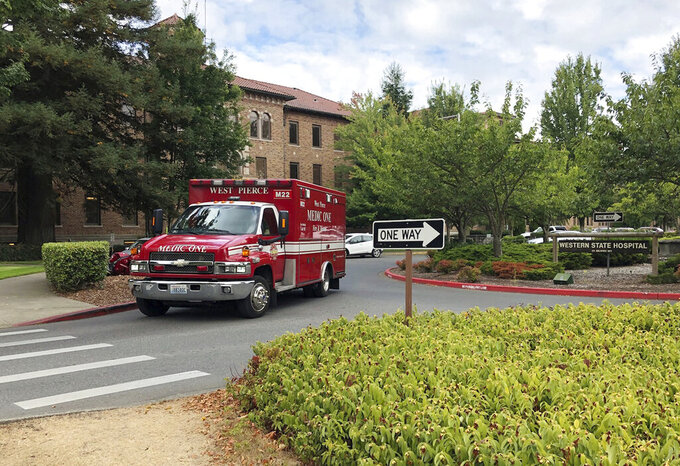 FILE - In this Aug. 30, 2018, file photo, an ambulance leaves Western State Hospital in Lakewood, Wash. As coronavirus cases spike at Washington state's largest psychiatric hospital, workers are pleading with officials to save them not just from the disease, but also from the violence that continues to plague the facility. (AP Photo/Martha Bellisle, File)

SEATTLE (AP) — As coronavirus cases spike at Washington state's largest psychiatric hospital, workers are pleading with officials to save them not just from the disease, but also from the violence that continues to plague the facility.

“It's disheartening. You see an ambulance come not to bring a patient but to take one of your peers out of here because our management fails to staff this facility,” John Henson, a mental health technician at Western State Hospital, told The Associated Press. “Our members are getting hurt, getting beat up.”

Last week, a social worker suffered a head injury when she was assaulted “and will never be the same," Mike Yestramski, a psychiatric social worker told the hospital's CEO in a recent email. They had six patient-on-patient assaults on one ward during a recent shift and a discharge team driver was assaulted a few weeks back, he said.

“We’ve lost more staff than I can count because of this, either they’re too injured to return to work or they’re afraid to return,” Yestramski said. “I’m sick and tired of seeing my friends/coworkers get injured (sometimes permanently) and I’m sick and tired of explaining to their loved ones why their employer allowed this to happen."

Kelly Von Holtz, spokeswoman for the Department of Social and Health Services, disputed their accounts.

“COVID-19 has provided challenges but even so, we have not seen a dramatic increase in assaults at Western State Hospital,” she said. “Safety of patients and staff at all three of our psychiatric facilities continues to be a top priority for DSHS.”

The 850-bed hospital lost its accreditation from the Centers for Medicare and Medicaid Services and $53 million in annual federal funds in 2018 due to repeated health and safety violations.

Workers say assaults are still a problem and say state officials are mishandling the COVID-19 crisis.

As of Thursday, 23 patients and 74 workers have tested positive for the disease, numbers that have doubled since mid-July. At Eastern State Hospital, 10 patients and 25 workers caught COVID-19.

State officials said the rise in cases reflects an increase being seen in the communities around the two facilities.

“We continue to see what local health jurisdictions are seeing,” Von Holtz said. “We did see an increase of cases at Eastern when there was a spike in Spokane County cases.”

The same was true with Western State Hospital in Pierce County, she said.

When patients are admitted to either hospital, they are quarantined for 14 days to protect patients already at the hospital, Von Holtz said. They also conduct screenings for workers who arrive each day and require employees to wear masks.

Workers say lax quarantine protocols are one of many problems.

When someone tests positive on a ward, that section is supposed to be quarantined for 14 days, but 10 days later, new patients are brought in, said Anne Tarlton, a psychiatric social worker.

“We had three separate incidents where we had staff and patients test positive,” she said. The staff got tested and were told they were on quarantine for two weeks and won’t take any new patients, she said.

“And then about day 10 that changes," she said. “They decide we’re going to start taking patients again even though we’re not through the 14 days."

Face masks have also been an issue.

“When this first started six months ago, they didn’t want people to wear mask at all,” Yestramski said. “Anyone who wore one would be disciplined. Then that changed to you can wear one but you have to bring your own.”

Now staff must use hospital-issued masks, he said.

The hospital also prohibits patients from wearing masks, said Diana Callison, whose daughter is a patient at Western State.

“My daughter wants to wear a mask to protect herself from the screamers on her ward,” Callison said.

Officials said it wasn't allowed because masks were a ligature risk, she said.

“Western is also looking at innovative ways to continue increasing violence reduction training and will soon implement virtual reality training with the intent of developing therapeutic intervention skills for staff to help them understand the challenges of psychiatric patients,” she said.

But staff say the violence prevention training was stopped due to the coronavirus. They also were supposed to put barriers around nurses stations to protect against attacks, but that work was delayed.

At the same time, they've opened visitation for patients and called back at-risk workers. The facility is chronically under-staffed and overtime costs are excessive, workers say.

“I find that unacceptable,” Yestramski said. “They can't upgrade the wards and can't do training because of the virus but they can bring back 62-year-old people with heart and breathing conditions and make them work the floor.”