AstraZeneca, EU both claim a win in vaccine delivery tussle 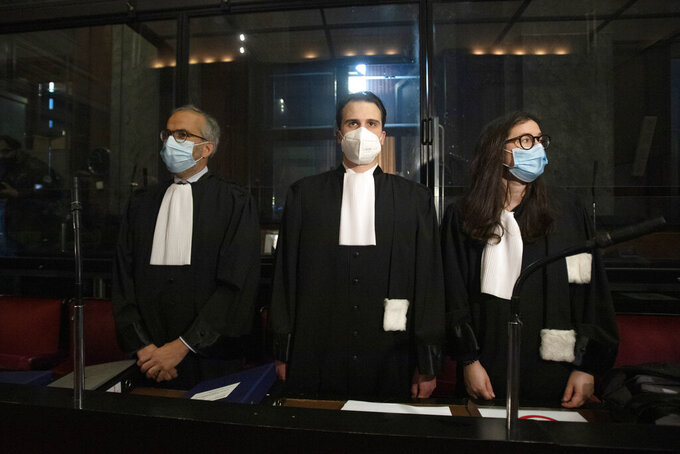 FILE - In this May 26, 2021, file photo, lawyers for AstraZeneca Clemence Van Muylder, right, and Hakim Boularbah, left, wait for the start of a hearing, European Commission vs AstraZeneca, at the main courthouse in Brussels. Coronavirus vaccine-maker AstraZeneca is claiming victory in a court tussle with the European Union over allegations that it was not producing shots fast enough. In a statement Friday, June 18 they said the EU’s executive branch, the European Commission, had requested that the drug-maker deliver 120 million vaccine doses in total by the end of June 2021, but that a judge in Brussels ordered delivery of 80.2 million doses by 27 September 2021. (AP Photo/Virginia Mayo, File)

BRUSSELS (AP) — A Belgian court ruled Friday that coronavirus vaccine-maker AstraZeneca had committed a “serious breach” of its contract with the European Union amid a major legal battle over delivery obligations that has tarnished the company’s image.

The court ordered AstraZeneca to deliver a total of 80.2 million doses to the EU from the time the contract was agreed up until Sept. 27. The ruling said the company did not appear to have made a “best reasonable effort” to meet the delivery schedule because it had not used its U.K. production sites.

But the Anglo-Swedish company claimed victory, saying that this was far fewer than the 120 million doses that the EU’s executive branch, the European Commission, was seeking in total by the end of June. It also welcomed the court’s acknowledgement that it was under unprecedented pressure.

AstraZeneca was seen as a key pillar of the EU’s vaccine rollout. Its contract with the Commission foresaw an initial 300 million doses being distributed, with an option for another 100 million, but the speed of deliveries was far slower than the company originally thought.

“We are pleased with the Court’s order,” Executive Vice-President Jeffrey Pott said in a statement. “AstraZeneca has fully complied with its agreement with the European Commission and we will continue to focus on the urgent task of supplying an effective vaccine.”

“This decision confirms the position of the Commission: AstraZeneca did not live up to the commitments it made in the contract. It is good to see that an independent judge confirms this,” Commission President Ursula von der Leyen said.

“This shows that our European vaccination campaign not only delivers for our citizens day by day. It also demonstrates that it was founded on a sound legal basis,” she said in a statement.

AstraZeneca’s image has been hurt by the slow pace of its vaccine production, but despite EU dissatisfaction with the speed of deliveries the Commission still recommends the company’s shots as effective protection against the coronavirus.

Ultimately, AstraZeneca is likely to meet the court’s order with ease. It had already supplied 30 million doses until the end of March. From March to June, it supplied a further 40 million doses. That leaves it with just over 10 million of the 80.2 million doses to provide by Sept. 27.

Two further hearings have been scheduled for September in case the Commission is still not satisfied.

From the beginning, the Commission has claimed that it launched the emergency legal procedure, which started at the Brussels Court of First Instance last month, simply to secure the vaccine doses that EU member countries were promised.

It accused AstraZeneca of acting in bad faith by providing shots to other countries, notably Britain, and argued that the company should have used its production sites in the U.K. to help fill the EU’s order.

But AstraZeneca argued that the challenges of producing and delivering the vaccine could not have been foreseen during a once-in-a-century pandemic, and that its U.K. sites were primarily meant to be used to service its contract with the British government.

In its 67-page ruling though, the court suggested that the company might not have used all the means at its disposal, including the Oxford Biomedica and Halix sites in the U.K., to meet its EU supply schedule. This could be perceived as not making a “best reasonable effort” to fulfil its contract.

In its statement, AstraZeneca said that it “now looks forward to renewed collaboration with the European Commission to help combat the pandemic in Europe.”

While its deliveries will continue this year, the Commission has already decided not to renew its contract with the company.