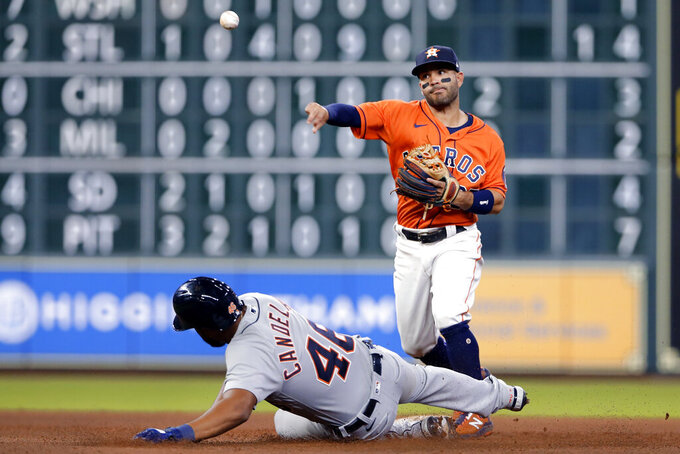 HOUSTON (AP) — Astros starter Jake Odorizzi has been placed on the 10-day injured list with a strained muscle in his right arm and second baseman José Altuve has been activated after a bout with COVID-19.

Odorizzi left his start on Saturday after just five pitches with what the team called tightness in his right forearm, and manager Dusty Baker announced Monday that he had a strained right pronator.

Altuve, the 2017 AL MVP, was among five Astros who were placed on the COVID-19 list on April 14. The other four returned within days, but Altuve remained out. He cleared health and safety protocols on Friday and revealed Saturday that he had tested positive for COVID-19 but did not have any symptoms.

Altuve said he received the first dose of one of the COVID-19 vaccines before testing positive, and that he has no idea how he contracted the virus.

Altuve is off to a strong start in 2021 after a down year in last season’s pandemic-shortened campaign. He is hitting .318 with one homer, three doubles and five RBIs in 11 games. Baker said he would bat leadoff on Monday night when the Astros begin a four-game series against the Mariners.

Odorizzi got a late start to the season after not signing with the Astros until March 8. His deal guarantees him $20.25 million over two years or $23.5 million over three seasons if a player option is exercised for 2023.

“I feel pretty fortunate that it was only something very minor," he said. “And maybe the other day was just my body protecting itself and not letting it get into a worse position than I’m in right now. So I’m pretty optimistic about, I’m happy with the results."

An All-Star in 2019 with Minnesota, Odorizzi was hoping to bounce back from an injury-plagued 2020 season, when he pitched just 13 2/3 innings.