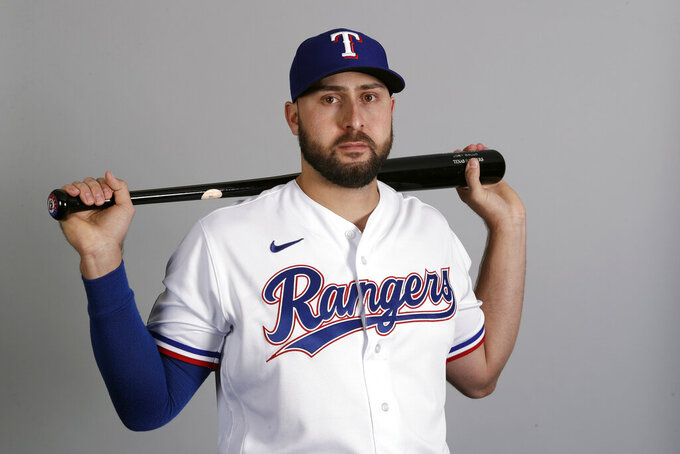 FILE - This is a 2020 file photo showing Joey Gallo of the Texas Rangers baseball team. Rangers slugger Joey Gallo has tested positive for COVID-19, though the team says the All-Star right fielder is asymptomatic. General manager Jon Daniels said Monday, July 6, 2020, that Gallo is isolated at his apartment in Dallas and not around teammates. (AP Photo/Charlie Riedel, File)

ARLINGTON, Texas (AP) — All-Star slugger Joey Gallo tested positive for the coronavirus, forcing the outfielder who is asymptomatic to miss the start of summer camp for the Texas Rangers after being among teammates who had worked out at their new ballpark for several weeks before that.

Rangers general manager Jon Daniels said Monday that Gallo has had multiple tests, including one that came back negative. He was isolating at his high-rise Dallas apartment and away from teammates.

“Our mindset going into this was it’s not a matter if guys tested positive but when,” Daniels said. “Obviously this thing doesn’t discriminate whether it’s a star player (or) somebody trying to make the club. The key thing for us is Joey is asymptomatic and feels good. ... He told me yesterday he feels as good as he ever has and is in the best shape he’s ever been in.”

The 26-year-old Gallo initially took a saliva test as part of the team’s intake process June 27, and got a positive result two days later. Gallo, who allowed the Rangers to share the information, took a nasal swab test on June 30 that came back negative, but then had another saliva test that came back positive Sunday.

Daniels said he wasn't concerned about Gallo working out previously with other teammates at the stadium, “because who else had been here has gone through the testing procedure and has tested negative. So I feel pretty good about that part."

Manager Chris Woodward said after Monday’s workout, the team’s fourth without Gallo, that he had been in contact with the slugger throughout the process.

“Obviously he’s frustrated, but he’s got a really good mature sense of how to handle this,” Woodward said. “He’s got to kind of ride it out, he’s got to do the best he can to be prepared when he comes back. ... This whole situation is going to affect every team, and right now it got our best player. But he’s in good spirits and he’s going to work through it, and we’ll support him through it.”

The Rangers said Friday when the team opened camp that left-handed reliever Brett Martin tested positive for the coronavirus during the intake process. He had spent the time away at home in Tennessee. Martin, already at higher risk because he has Type 1 diabetes, has also self-isolated in the Dallas area since his positive test.

Both Gallo and Martin will have to have two consecutive negative tests more than 24 hours apart and be cleared by a physician before they can rejoin the team.

Martin, who pitched in 51 games as a rookie last season, had felt some mild symptoms of COVID-19, including congestion and fatigue.

Daniels said Gallo should be good to go when he is cleared, assuming that he doesn't develop any symptoms. The team has recommended him doing only light activity on his own while away from the team.

“Obviously Joey is one of our best players. From a baseball standpoint, it’s not great. But it’s also early in the process and if this thing follows the timeline as some of the other asymptomatic cases that we are aware of, he’ll have plenty of time to be ready,” Daniels said. “I’m hopeful it’s approximately two weeks. The bulk of that time has already passed. If that does hold, he’ll be ready for the season."

Monday marked the ninth day since the initial test for Gallo that came back positive. The Rangers are scheduled to open the season and break in their new, retractable-roof ballpark, without fans, on July 24 against Colorado.

Gallo has 110 career homers in his 416 big league games. After consecutive 40-homer seasons while hitting under .210, he had 22 homers and a .253 average in 70 games last season, when he was an All-Star before right wrist surgery. He homered in the All-Star game.

First baseman Ronald Guzmán hasn't taken part in workouts since the Rangers started camp. Daniels said Monday that Guzmán was still in the intake process, and wasn't yet cleared for workouts even though he was allowed to be at team facilities.