Atalanta hosts Brescia with both teams united by tragedy 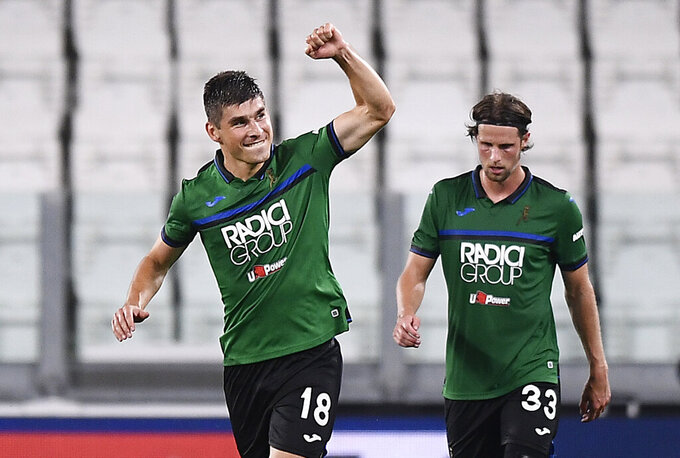 Atalanta's Ruslan Malinovskyi celebrates after a goal during the Serie A soccer match between Juventus and Atalanta at the Allianz Stadium in Turin, Italy, Saturday, July 11, 2020. (Fabio Ferrari/LaPresse via AP)

MILAN (AP) — These were the words written on a banner during the height of the coronavirus pandemic in Italy: “Divided in the stands, united in pain.”

The banner, which also showed an Atalanta fan hugging a Brescia supporter, was displayed on a bridge linking the hard-hit provinces of Brescia and Bergamo, where Atalanta plays its soccer.

On Tuesday, the fierce rivalry between the two teams will resume with both needing the points for very different reasons. Atalanta is closing in on second place, while Brescia is facing relegation.

But with Atalanta and Brescia united by tragedy, the Lombardy derby will be a particularly poignant affair.

It was in northern Lombardy’s provinces of Bergamo and Brescia where the outbreak erupted in late February. The provinces fast became ground zero of the European epidemic and together account for around a quarter of Italy’s 35,000 official COVID-19 deaths.

Since even before the restart, Atalanta players have talked about bringing the smiles back to the faces of their supporters and they are keen to keep doing precisely that.

“It’s the derby and for our supporters and I think we need to win this game because it’s really important for our fans,” Atalanta midfielder Ruslan Malinovskyi said.

“They are not with us in the stadium but we feel them and they support us, and of course we try to win this game and take three points at home.”

Atalanta has gone from strength to strength since the restart and drew 2-2 at Juventus on Saturday to move to within a point of second-placed Lazio. Indeed, Juventus needed two penalties from Cristiano Ronaldo — including a 90th-minute equalizer — to prevent Atalanta from winning its 12th straight match in all competitions.

Brescia, in contrast, lost 3-0 at Roma to leave it even more in trouble at the wrong end of the table.

It is now nine points from safety with six matches remaining, and some reports have described the players as already being resigned to their fate.

“We did what we had to do against a good team, we fought, we played ... so talk of a team which is already resigned seems rather exaggerated to me, I really didn’t see it like that,” Brescia coach Diego López said.

“We still have hope, it wasn’t the last resort. We have more matches where we have to play and get points and then hope, seeing as we are so far behind. Tuesday there will be another good team ahead of us and, being a derby, we have to go there with a lot of personality and try to control the match.”